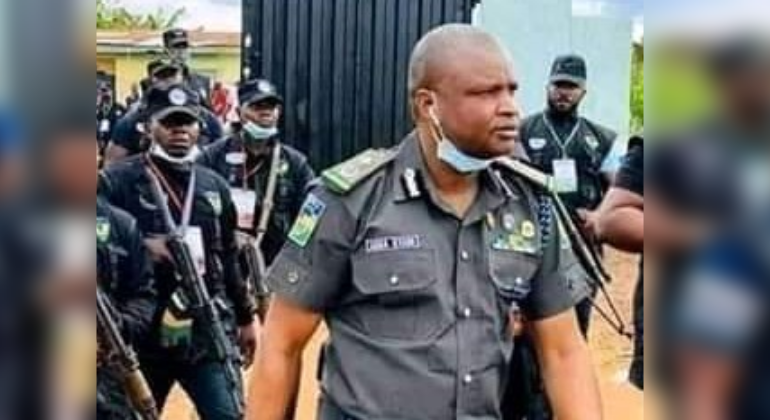 Members of the gang had attempted to attack the state police command headquarters in Owerri.

Briefing journalists at the command headquarters, Elkana said Dragon was an army deserter, who took over from the former commander, Ikonso.

He said four AK-47 rifles stolen from policemen, ammunition, local explosives and charms were recovered from the fallen felons.

The only suspect captured alive, Stanley Osinachi, from Mbieri in the Mbaitoli Local Government Area of the state, said he was conscripted to attack police and government formations.

“The attackers, who came in a white hummer bus, wanted to access the Command Headquarters through Works Layout around Alvan Nursery and Primary School, Owerri, but had a bloody fight with the security forces.

“They were first intercepted by the military at the outer perimeter cordon provided for the police. Five hoodlums were killed in action, including Joseph Uka Nnachi alias King of Dragons.

“A police inspector sustained gunshot wounds during the exchange of fire this morning and is currently receiving medical attention.

However, while police in the state confirmed that five hoodlums were neutralised (killed) in the gun duel in many parts of Owerri, a source at Federal Medical Centre, Owerri, confided in our correspondent that at least, five corpses of policemen were brought to the morgue.

The police spokesperson in the state, Bala Elkana, expressed confidence that the security operatives were the battle against hoodlums in the state.

He disclosed that additional four rifles had been recovered from the hoodlums by the security agents.

Elkana, in an additional statement, said, “Number of hoodlums killed now is five while four AK-47 rifles stolen from the police during recent attack on our police station were recovered.

“We have one injured police officer in a critical condition at the moment. We pray the doctors will be able to stabilise him.”

He was, however, silent on the alleged five lifeless bodies of policemen brought to the morgue of the Federal Medical Centre in Owerri.

Meanwhile, a group of suspected arsonists reportedly razed the houses of the state Commissioner for Information and Strategy, Chief Declan Emelumba, and that of the Oru West Local Government Chairman, Chief Willy Okolieogwo.

One of the incidents occurred Saturday night when the hoodlums stormed the house of the commissioner in Ubulu community in the Oru West Local Government Area and set it ablaze.

The hoodlums immediately moved down to Nempi community, the country home of the Oru West council boss, where they equally set his house ablaze.

Emelumba, who is one of the kitchen cabinet members of State Governor, Hope Uzodimma, confirmed the incident to journalists in the state.