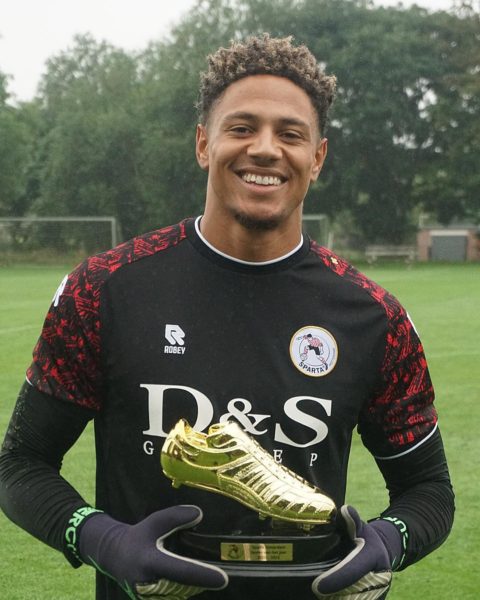 Super Eagles goalkeeper Maduka Okoye has won Sparta Rotterdam’s Player of the Season for his impressive performance for the Dutch side in the 2020/2021 campaign.

The 21-year-old played 28 games for the Eredivisie outfit during the campaign and kept ten clean sheets to earn the club’s top prize.

“Supporters of Sparta Rotterdam were given the opportunity to vote for their Player of the Season, an election that was won by Maduka Okoye,” Sparta said while announcing the shot-stopper as the winner of the award.

“The goalkeeper, who played 28 league games and managed to keep his goal clean ten times, received the prize this morning from Henk van Stee.”

The youngster joined the Rotterdam-based side in the summer of 2020 on a free transfer from German team Fortuna Dusseldorf II.

Although he had a somewhat hard time finding his feet in The Netherlands, he has now become a key part of Hendrikus “Henk” Fraser’s side.

His performances for the club helped them to finish the campaign in eighth position.

“With competitors such as Remko Pasveer from Vitesse and Sergio Padt from FC Groningen, the choice was not easy, but Okoye had a wonderful season at Sparta,” the organisers of the award and Dutch newspaper Voetbalzone wrote on its website.

He conceded 35 goals and saved 33% of the penalties he faced during the season under review.

Okoye made his debut for Nigeria in a friendly game against Brazil in October 2019 and has since then emerged as the three-time African champions first-choice goalkeeper.