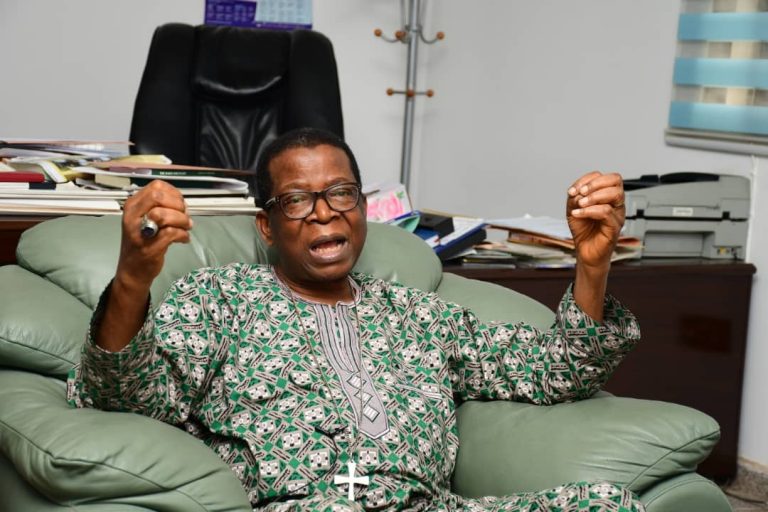 The Lord blessed the Church of Nigeria (Anglican Communion) with such a visionary, focused, Courageous, quintessential, amiable and inspirational Father in the person of His Grace, The Most Rev’d Nicholas D. Okoh (Primate of Our Church).

Perhaps the most audacious project embarked upon by Primate Okoh in the pursuit of evangelical revival is the establishment of the Advent Cable Network Nigeria Television (ACNNTV). With this he took the Church of Nigeria Anglican Communion to the hitech age with ability to reach homes and other places in any part of the world with the message of the gospel – The Undiluted Word of God-This has enhanced the spread of the gospel while also ensuring the spiritual nourishment of members in their homes, beyond their physical encounters in the four walls of the church.

This vision was made possible by the unrelenting effort of the Primate Okoh and the uncommon financial support for the take-off of our great cable television, ACNN by the family of Mr. and Mrs. Modupe and Folorunsho Alakija.

The establishment of the Anglican television (ACNN TV) transmitting on a cable satellite called IntelSat 20 popularly known as MyTv Free to air since the year 2013 is one of the giant stride of our Father in God as it remained the only known Anglican Satellite TV worldwide.

His efforts on the Television outfit cannot be over-emphasized. For every outfit that is in its early stage, there are challenges which requires a focused leader to surmount and we always run to him most of the times. He has passionately taken up these challenges and does all in his capacity to resolve them.

He has being a Father who understood that for a church, at this time, to fulfill its great commission needed multi media to propagate the gospel to the nooks and crannies corners of the world. People are mostly reached through Radio and Television more quickly to spread the undiluted word of God by harvesting souls into His Kingdom.
Primate Okoh noted in one of his presentations “A vital component for future Evangelism is electronic media and the internet: ACNN has come as part of the response of the Church of Nigeria to need of the age.”

When Marshall McLuhan coined the phrase, “the medium is the message” in 1964, personal computers were unknown, mobile phones were science fiction, and the Internet did not exist. Today, we understand what great foresight he had in predicting how much the human mind and thoughts are influenced in this digital age. Television and Multi-media have become the medium which the world has embraced to pass information and enlightenment across borders and to change mindset.

ACNN broadcast on one of the major free to air platforms which has it footprints in over 70 countries cutting across two major continents (Africa and Europe) with approximately 2.5 Million viewers and a massive presence on social media platforms (Facebook, Youtube Twitter and Instagram) and a functional dynamic news website (www.acnntv.com).
Primate Okoh has been so passionate about this outfit and we cannot but put this to record. His efforts so far especially in raising funds needed to keep the station on air was commendable. Most of the times when the station could not raise enough fund to pay its service provider, the Primate ensured payment was sourced from the Church of Nigeria’s purse to keep the station on air.

Under his leadership ACNNTV was allocated a befitting Headquarters office at St. Matthias House with an international standard studio. Without doubt Primate Okoh has given the Church of Nigeria, Anglican Communion a great legacy that has put the Church in its leading position in the Anglican Communion worldwide and also in the Christian community.

But for the vision conceived and implemented 8years ago, the Church of Nigeria Anglican Communion would have been most affected by the scourge of the coronavirus in the year 2020 where Churches were shut down and most members now rely on Television broadcasting online Sunday services and have been beneficial to most Church members on who are on retirement.

The station has grown from 3 staff to 20 and runs 24/7 all the year bringing to bear the Anglican heritage and its dynamism. Its also watch across the world via the Internet protocol TV platforms like ROKU, Android TV, Amazon etc. Its also available on IoS and Google Play Apps like VM Africa, WiTV Africa and OH Prime TV. Watching ACNN TV is free after installation and available at any satellite store.

Currently the board of ACNN ably chaired by Sir Folu Olamiti was constituted by Primate Okoh in September 2017 after the expiration of the pioneer board chaired by Archbishop Dada Akinde (Rtd.). The current board was put together in his quest to take the station to its next level and that is evidently happening before he retired from office.
December 12th 2019 was a remarkable day when the new studio of Advent Cable Network Nigeria was dedicated and name changed from its initial name (Anglican Cable Network Nigeria) for it to not only be for Anglicans alone but for all Christians worldwide. The new studio was also named after the family who contributed heavily to start up the station (Mr. and Mrs. Modupe and Folorunsho Alakija Studio).

Primate Okoh noted at the opening of the new ACNN studio that “Establishing a viable TV station for the Church of Nigeria was a major part of our vision and burden as Primate. Although, we are not where we wish to be on the project, we give God glory for the journey so far. Our call is to all Anglicans to work together to sustain this legacy because our future survival and relevance largely depends on it.”