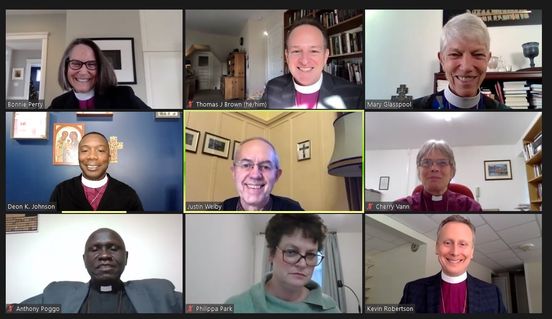 Four gay and lesbian Episcopal bishops, along with two from Anglican dioceses in Canada and Wales, spoke with Archbishop of Canterbury Justin Welby on Jan. 11 in what they described afterward as “a very Christ-centered meeting,” as bishops across the global Anglican Communion prepare to attend the Lambeth Conference in late July and early August.

After the bishops’ Zoom meeting with Welby, Missouri Bishop Deon Johnson posted a screengrab of the meeting to his Facebook page. The participating bishops declined to comment further when Episcopal News Service inquired with their dioceses. The Diocese of Missouri later told ENS that the LGBTQ bishops had initiated the meeting.

The archbishop of Canterbury convenes the Lambeth Conference of bishops about every 10 years. Tensions over LGBTQ bishops’ attendance at this year’s conference has focused on Welby’s decision to invite those bishops but not their spouses. Within The Episcopal Church, criticism of that decision came to a head at the September 2019 meeting of the House of Bishops, which issued a message of solidarity with the bishops and their excluded spouses.

The controversy was not addressed the Facebook post by Johnson. He was joined in the meeting by New York Assistant Bishop Mary Glasspool, Maine Bishop Thomas Brown and Michigan Bishop Bonnie Perry. Bishop Kevin Robertson of Canada’s Diocese of Toronto and Bishop Cherry Vann of Wales’ Diocese of Monmouth also participated.

“On Tuesday, January 11, 2022, some of the LGBTQ Bishops within the Anglican Communion had a very Christ-centered meeting with the Archbishop of Canterbury, the Most Reverend Justin Welby, which was very fruitful as we make our way towards the Lambeth Conference 2022,” Johnson’s post said. “In our meeting, we had an opportunity to hear and share stories that allow us to continue to walk in love. We are grateful to the Archbishop and his staff for their time and compassionate listening.”

ENS sought a comment from Welby but had not received a response from his communications team by the time this story was posted.

The Lambeth Conference, originally scheduled for 2020, was postponed to this year because of the coronavirus pandemic. It now is scheduled for July 27 to Aug. 8 in England at the University of Kent, Canterbury Cathedral and Lambeth Palace. Its stated purpose is to bring together bishops from the 41 Anglican provinces to discuss “church and world affairs and the global mission of the Anglican Communion for the decade ahead.”

In 2008, at the last Lambeth Conference, then-New Hampshire Bishop Gene Robinson, the first openly gay and partnered bishop in the Anglican Communion, was not allowed to attend by then-Archbishop of Canterbury Rowan Williams.

Amid planning for the upcoming Lambeth Conference, news broke in early 2019 that Welby had excluded same-sex spouses in his invitations to all bishops. He later defended the decision by saying he saw it as a way to balance the divisions in the communion. Some of the more conservative Anglican provinces maintain objections to The Episcopal Church’s widespread acceptance of LGBTQ clergy and same-sex marriage.

The Episcopal Church House of Bishops issued an initial statement in March 2019, saying it was “aggrieved and distressed” by Welby’s decision, though a majority of the bishops still planned to attend Lambeth Conference. The bishops’ follow-up message in September 2019 said each will engage in “faithful soul-searching” on how they will respond.

“The community of bishops and spouses supports and stands together in solidarity with each of our brothers and sisters in this Episcopal Church as they make these decisions according to their conscience and through prayerful discernment and invite the siblings of The Episcopal Church to join us in that solidarity,” the House of Bishops’ statement said.