FULL TEXT +VIDEO: A Sermon at the Funeral Service of Chief E. A. Shonekan By Archbishop Peter Akinola 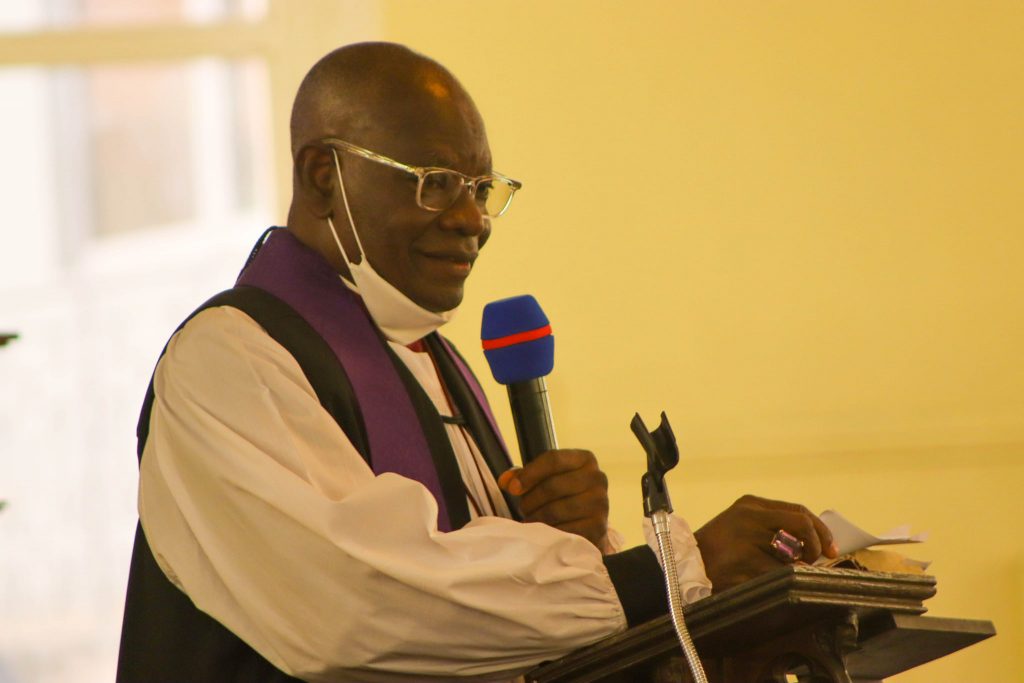 Give us grace O LORD, not only to hear your Word with our outward ears, but also to receive it into our hearts and show forth the fruits of your holy Word in our daily life for the glory of your great Name, Jesus Christ our LORD, Amen.

We greet you dear people of God who have come from far and near to be part of this glorious service of thanksgiving to God for the wonderful and fulfilled life of Chief Ernest Adegunle Shonekan. We thank you for coming and pray that as you have come in peace and safety, you’ll return to your places of abode safely and in peace; in the peerless Name of Jesus Christ.

Little over two thousand years ago, through the missionary efforts of Apostle Paul, Timothy and Silas, a church was planted in the city of Thessalonica, which at that time was the capital of the Roman province of Macedonia. Though the young church was fairly well grounded in the doctrines of the Church, members were not so sure of what would happen to them at the end of time and at the second coming of Christ; more so that some of their fellow members were dying. These new converts were part of the Greco-Roman society in which not a few believed that death was the end of everything. But they had left their old ways and religion and were now part of the new community of Christ. They believed Jesus was coming back; but what would be the portion of the dead members. So, whenever they lost any of their loved ones, they grieved endlessly and hopelessly.

This was what occasioned the writing of the first Epistle to the Thessalonian Church by Apostle Paul not only to inform and educate them, but to strengthen their faith and to encourage the church.

By using the metaphor of ‘sleep’ (which ordinarily is temporary) and not death; Paul helped the people to realise that their loved ones they thought had died and for whom all hope was lost would rise again, for they were but merely ‘asleep’ in the LORD. For the believer, death doesn’t have the final say. What is the Bible saying?

It’s simple. The Bible is saying to us all that when a true believer in Christ Jesus has come to the end of his earthly pilgrimage, he falls asleep in the LORD and at the Parousia, he will rise again but to a new life, a life that has no end in the eternal kingdom of God. In that Kingdom, Saint John tells us in Revelation 21: 3-4

“Behold, the tabernacle of God is with men, and He will dwell with them, and they shall be His people. God Himself will be with them and be their God. And God will wipe away every tear from their eyes; there shall be no more death, nor sorrow, nor crying. There shall be no more pain, for the former things have passed away.”

People of God, that’s where Ernest Adegunle Shonekan is now. He has left this world of thriving wickedness and the Church militant and is now at rest in the Church Triumphant.  Praise ye the LORD (3ce)

So, Auntie, Mrs Shonekan, the children and all the people, do not grieve endlessly and hopelessly like those who are without Christ. Rather, rejoice and be thankful to the LORD that after this dark world of sin, better things await those who know, love and serve the LORD. Thanks be to God.

A word or two will be appropriate at this point about the life and times of this great man of faith, man of prayer who was utterly committed to the things of the LORD. He was ever humble and totally unassuming. His love for God was easily visible in his relationship with people around him. To his dear wife and children, he was the best husband and father anyone could ever wish to have.

In the Church of God, he was a great pillar and shining example of authentic Christianity. In spite of his enviable high position in the society, he served as a church steward. His virtuous footprints are discernible here in Lagos, Abuja, Abeokuta, Ekpoma and many more. He would spend and be spent in service of the LORD. Regardless of whatever was going on, he remained steadfast and in so far as we know didn’t compromise his Christian faith and virtues.

In the world of business, he was a noted captain of industry and guru of the boardroom. As the head of the largest business conglomerate in Nigeria and West Africa, (UAC) he was not only very resourceful and successful, he was well established and contended. (See brochure)

He was not a politician. But, as he journeyed on in his life pilgrimage, at a point without thinking, planning or asking for it, he found himself in the ever dark and dreary and murky waters of Nigerian politics. Following the infamous annulment of the 1993 Presidential elections, the aftermath of which threw the country into chaos, he was invited and persuaded to head the Interim National Government, ING. Those were not the best of times for Nigeria and certainly not for any political leader. The situation was tense.

Nigerians demanded that General Babangida should leave office but for reasons best known to him, he was reluctant. But when it became clear that the political imbroglio if not quickly resolved could lead to violent agitation and mass bloodshed the Maradona of Nigerian politics created the transitional government to help usher in a new political arrangement. In the unfolding dangerous political drama, I remember that Chief Shonekan declined the offer to head the ING. Time was running out as Gen Babangida had fixed a date for himself to step aside.

As pressures mounted on Chief Shonekan from many quarters at home and abroad; he then said that he would to think about it. At this stage I remember vividly how his very good friend late Alhaji Dr Shehu Idris, at that time the Emir of Zazzau and this creature here addressing you were pleading with him to think of the pros and cons of not accepting the call to stand in the huge political gap. He was reminded that nationwide, tensions were running high and that anything could happen in the military barracks.

In addition, we also knew that from the very beginning of its journey to political nationhood (which it is yet to attain) Nigeria since Independence has been a blood- letting country. (Remember the western region operation “wet e”, the pogrom in northern Nigeria, the military coups and counter coups, the devastating 30-month civil war; hitherto unknown reckless armed robbery attacks and numerous political assassinations all of which sniffed precious life out of millions of innocent citizens.)

We were quick to realise that once violence broke out again, we would have no idea who would be consumed and who would remain. It was from this perspective that he was persuaded rather reluctantly to save the situation. He then decided that it was better, though equally risky to stand in the gap and avoid unnecessary bloodshed so that somehow, we would avoid a repeat of the 1963 dismal fiasco; and hopefully navigate through the political land mines to restore normalcy and democratic governance.

While some hailed him and breathed a deep sigh of relief, others did not welcome that decision. I still remember that the Alake of Egbaland, Oba Lipede called Chief Shonekan on phone repeatedly to come back home. Ironically, even some parts of the Church refused to give him benefit of the doubt. Pity.

Meanwhile, the political gladiators and the news media had a field day. They vilified and demonized him. To my utter consternation the same people who called him unprintable names in day time, would troop in to Akinola Aguda House Nicodemusly begging for all sorts of favours and political appointments. What a shame. (Aiye!) Some of those agitators claiming that on June 12 they stood were mere political opportunists and they made the loudest noise. I put it to you people of God on June 12 such people were feeding fat. Just as it is today, when we are suffering from the consequences of systemic failure, political opportunists are feeding fat on the present chaos. Nigeria has never had it so bad, (I reserve details for another occasion).

From our standpoint, Chief Shonekan put his life on the line for sake of this country. When Abacha struck, it was a fellow Yoruba man who put the gun on his head ordering him to sign his resignation. It may interest you to know that Chief Shonekan was not completely unaware of the possibility of the palace coup. Those close to him advised him to retire Gen Abacha and his clique and simultaneously announce the appointment of their replacement.

He wouldn’t. He reasoned that if Abacha was fired, the next in rank to him for appointment was a Yoruba man. If appointed, it would create a new problem as he, Shonekan, would be accused of tribalism and nepotism. And so, he not being a typical ambitious Nigerian politician refused to do anything to preserve himself in the office of Head of the Interim National Government. He would say to me, let us just continue to pray for God’s guidance and divine resolution to the challenges we were facing. In truth, we spent time praying and the LORD spared his precious life and came back home safely. The rest is history.

We’ll thank God that Chief Shonekan has done what he was able to do for his family, his church and his country. He has finished his own race. He is now asleep in the LORD. When he wakes up at the end of time, at the second coming of Christ, it will be in the glorious eternal Kingdom of God and with all the saints reign with Christ.

How about you brethren? Are you today in the LORD Jesus Christ and He is in you? Jesus is your only guaranteed hope for gaining access to eternal life after this increasingly terrible world has passed away.

Let us be careful the life we live. Be weary of judging others especially when you don’t have all the facts of the matter. Take heed that you don’t spend your today in any way that may ruin your tomorrow. (Repeat the TEXT)

And now to the King Immortal, Invisible, the only wise God be all honour, glory, dominion and majesty now and forevermore. Amen