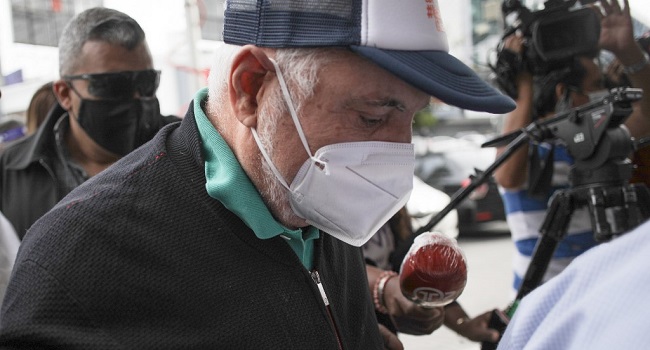 Martinelli was charged with money laundering over the so-called “New Business” case in which a publishing group was allegedly purchased with government funds during his 2009-14 term.

Martinelli, 68, was in a combative mood as he departed the public prosecutor’s office in Panama City.

“I’m going, to be frank with you, this pisses me off, this political persecution that has no end… they want to involve me (in the case) in order to do away with me,” he said, after refusing to testify.

Martinelli was held in pre-trial detention for two years after he was extradited from the United States to face trial for spying on his political foes. He was acquitted on those charges in 2019.

The 56-year-old former president is being investigated for allegedly accepting illegal donations to his political campaigns from Brazilian construction giant Odebrecht.

Varela, who left office last year, said afterward that he would “come as many times as necessary to prove my innocence, clarify any questions that the public prosecutor has and comply with the country and strengthen the rule of law.”

The appearance of the two former presidents “could mean, if there is any optimism, that… no one is above the law,” Carlos Barsallo, head of the Panamanian office of Transparency International, told AFP.

But “being realistic and prudent and based on previous experiences, we have to wait and see real and definitive results because, in Panama, the perception of impunity has prevailed,” he said.

Martinelli won the 2009 election with Varela as his running mate, but their alliance broke down in 2011 when Varela was sacked as foreign minister.

Since then, the two former political allies have become enemies.