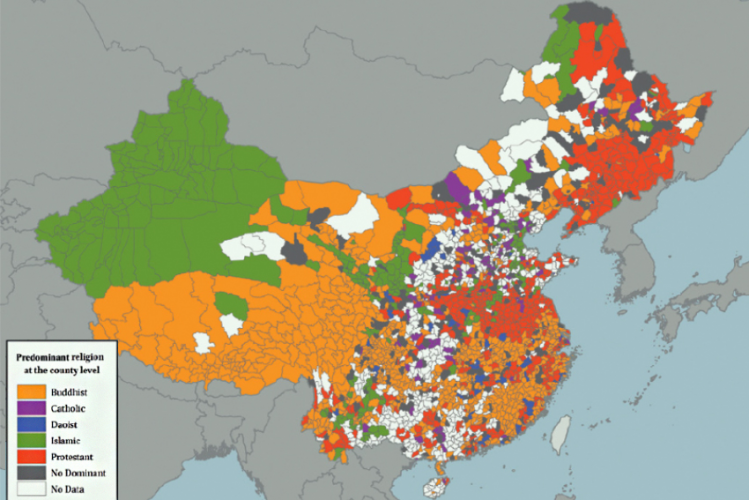 A book launch on the map of China’s contemporary religious landscape has been published.

This atlas has been regarded by some as an unprecedented work showing China’s contemporary religious landscape.

Published by Brill Publishers initially in 2018, the book’s digital version is now available through open access.

Compiled by Professor Yang and his team at Purdue University’s Center on Religion and the Global East, this English-language atlas offers over 150 maps, a review of China’s religions, as well a close-up analysis of 31 provinces.

Professor Yang, the founding Director of the Center on Religion and the Global East at Purdue University and also the founding Editor of the Review of Religion and Chinese Society, mentioned how the atlas features six components: authoritative data; theories and categorization; introductions and reviews; full-color maps; charts; and pictures.

According to the professor of sociology, the majority of the data used in the book came from the National Economic Census conducted by the National Bureau of Statistics of China in 2004. Religious organizations with any economic activity were subject to the census, and a total of 72,887 sites of five legal religions (Buddhism, Islam, Protestantism, Daoism, Catholicism) were included.

“Data from these censuses are authoritative yet limited to registered religious organizations in Mainland China. Underground religious sites or those in Taiwan, Hong Kong or Macau were not covered in the censuses,” said Professor Yang.

Based on these data, the book offers an overview of the overall religion “market” at a national level. Professor Yang’s “Triple Markets” theory divides all religious organizations in China into three colors. The “Red” market refers to the legal organizations of the five legal religions in China, and detailed figures, maps and analysis are devoted to each religion.

The “Gray” market refers to what he called “semi-legal religions”, such as Confucianism and Protestant house churches. And the “Black” market refers to the illegal religions, including the Shouters and Falun Gong. “The gray and black markets were not covered by the authoritative data achieved through censuses, so mainly they were given only reviews and descriptions.”

At the provincial and county levels, Professor Yang and his team formulated topography maps, religious site maps, as well as maps of noteworthy demographic features particular to the province, such as immigration, education, and young population changes. Visualized maps, charts, and pictures are supplemented with text introductions of local topography, demography, and key religious facts.

He concluded that this atlas was intended to be a true representation of the religious landscape in contemporary China, analyzed using sociological and geographical approaches.

At the book release, several scholars from different disciplines offered their comments. Professor He Guanghu commented that religion is an indispensable part of human geography. As a philosophy and religion professor at the Renmin University of China, he called for more geographical studies in religion.

Dr. Paulos Huang, adjunct professor of the Study of Religions at the University of Helsinki, suggested to those attending that future research could take into account the predominant religion-like element in China – the ideology of Chinese communism. He observed that political seminars were a CCP counterpart of Christians’ Bible studies and could be counted as a religious activity.

Professor Jiang Wu, director of the Center for Buddhist Studies at the University of Arizona, noticed that the atlas created a new paradigm for religious studies. The maps visualized features and variability in religious site distribution, inviting future studies to interpret. He also called for researchers to focus on the gray market.

Dr. Wang Chao, adjunct professor of Ethnology at Northwest Minzu University also pointed out a few possibilities for future research. While this atlas provides a relatively static picture of contemporary Chinese religions, diachronic studies showing historical changes could be beneficial too. Other factors, including denomination and ethnic background, should also be taken into account, he believed.

The digital version of Atlas of Religion in China: Social and Geographical Contextscan be accessed here.