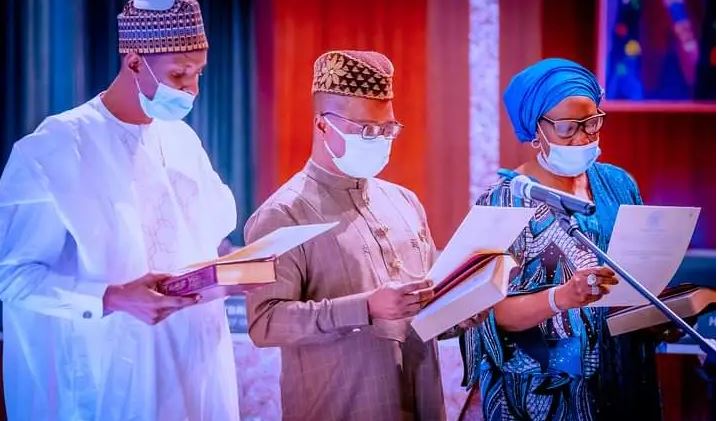 President Muhammadu Buhari has administered the Oath of Office to three new Permanent Secretaries of the Federal Civil Service.

DAILY POST reports that the Permanent Secretaries include Lydia Jafiya from Adamawa; Farouk Yabo from Sokoto and Udom Okokon Ekenam from Akwa Ibom

The ceremony was performed at the Council Chambers of the presidential villa, Abuja before the commencement of the weekly virtual meeting of the Federal Executive Council (FEC) on Wednesday.

Vice-President Yemi Osinbajo, the Secretary to the Government of the Federation (SGF), Boss Mustapha; Head of the National Security Council (NSA), retired Gen. Babagana Monguno, and the head of the Federal Civil Service, Dr. Folasade Yemi-Esan were all at the meeting.

The Ministers of Finance, Budget and National Planning; Information and Culture; Federal Capital Territory (FCT), Dr. Zainab Ahmed, Lai Mohammed, and Muhammed Bello respectively, as well as the Attorney-General and Minister of Justice, Abubakar Malami were also at the meeting.