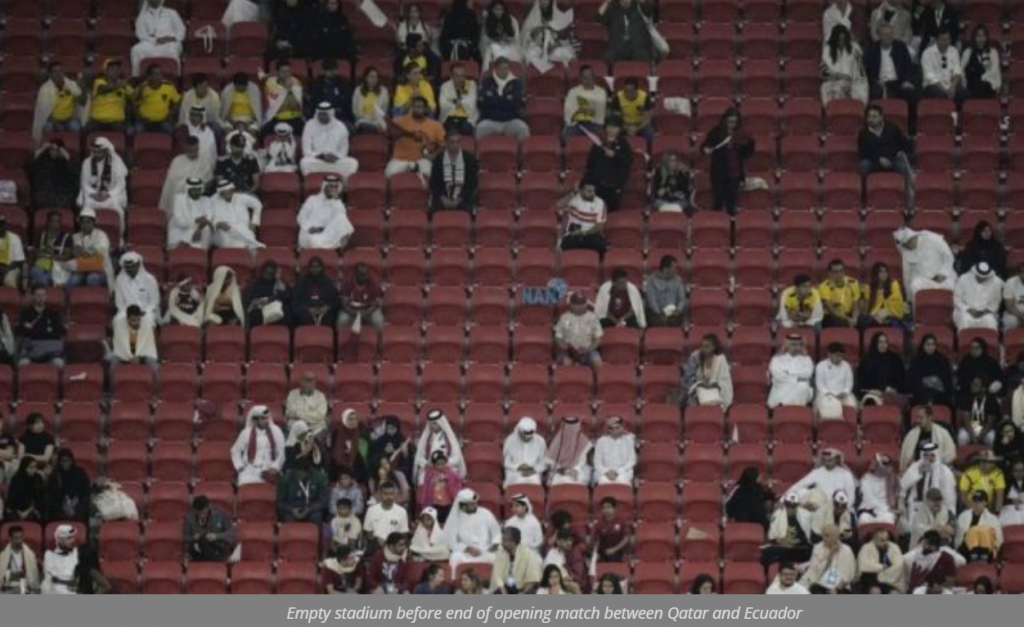 World Cup hosts Qatar were criticised on Sunday because the stadium was half empty by the closing stages of the tournament opening match between Qatar and Ecuador.

Thousands of fans left Al Bayt Stadium during the second half as Qatar were unable to fight back from two goals down at intermission in their 2-0 defeat.

Organisers had said that the arena was sold out with 67,372 fans for the opening ceremony and the game.

But many of those seemingly did not even appear to return to their seats for the second half, with the exodus continuing until the end.

Qatar became the first hosts in the 92-year World Cup history to suffer defeat in an opening match.

They can now share the fate of South Africa who in 2010 became so far the only hosts who did not make it into the second round.

“South Africa also had a tough time as World Cup hosts, but somehow you had the feeling that with the country behind you and with the spirit and fire of the people, you can somehow develop a force.

“You didn’t have that feeling at all today,” he said.

The exodus contributed to “a flat atmosphere both off and on the pitch”, but Qatar coach Felix Sanchez insisted that the atmosphere was “great” and they felt backed.

“We felt supported and we hope for the next game that people will feel prouder. I am convinced they will keep supporting us to the end of the tournament,” Sanchez said.

“We are sorry that we could not contribute to this great atmosphere and the party. But we knew this could happen.”