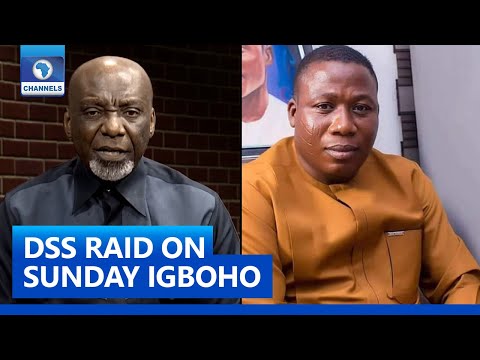 A former Assistant Director with the Department of State Services (DSS), Dennis Amachree, stated this on Friday during an interview on Channels Television’s Sunrise Daily.

“The action of the DSS is preemptive and it is also a warning to all those who have been stockpiling arms in different parts of the country,” he said in reaction to a raid carried out by DSS operatives on Igboho’s house in Ibadan on Thursday.

“We have Amotekun. Why is Sunday not operating with Amotekun? This is a question that should be asked but he is operating a separate thing different from Amotekun and of course, having all kinds of weapons.

“With all those loaded magazines, that means he is ready for war and I don’t think that is the way to go. If people are going for self-determination, there are peaceful ways of going about it.”

Amachree’s remarks come a day after the secret service said a team of joint security operatives apprehended 13 of his armed men.

He noted that nine of Igboho’s boys attacked security operatives, adding that they were overpowered, leading to the death of two persons.

The secret service explained the long arm of the law will still reach Igboho, urging the agitator to turn himself in or be tracked down.

“He might have attacked security operatives as his strength carried him. But this will be the end of his shenanigans. Soon, he will not have a hiding place. His strength will sure fail him,” Afunaya added.

Igboho rose to prominence earlier in the year after he issued a quit notice to herders in Oyo State accused of crimes.

The raid comes less than a week after the arrest of prominent pro-Biafran independence leader Nnamdi Kanu.

The leader of the Indigenous People of Biafra (IPOB) group, which supports the secession of the south-east of Nigeria, Kanu was arrested abroad after four years on the run and brought to Nigeria, where he will go on trial for “terrorism” this month.