Entrepreneurial University Takes Off in Enugu 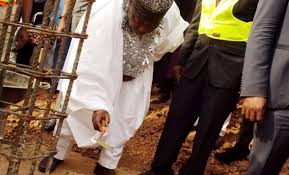 History was made in Enugu State, weekend, as Governor Ifeanyi Ugwuanyi laid the foundation of Samuel Maduka University, Agu-Ekwegbe in Igbo-Etiti Local Government Area of the State.

In his speech, Gov. Ugwuanyi expressed delight at the driving spirit of Dr. Onyishi in envisioning a University that is entrepreneurial in content, describing it as another milestone achievement.

The Governor, who congratulated the founder of the University for his courage and vision in establishing the institution, reiterated the premium his administration places on education as one of its cardinal policies.

He stressed that this “is why in almost five years, education has taken the second position, only after Works and Infrastructure, in the state capital budget portfolio”.

Gov. Ugwuanyi added that his administration has provided a conducive environment for teaching and learning in both primary and secondary schools across the state and also “ensured that our tertiary institutions are functional and stable”.

The governor therefore expressed optimism that the University when completed, will create employment, especially for the youth as well as provide the much-needed manpower for the industrial and technological growth of the country.

He assured that the State Government would give all the needed support to the University.