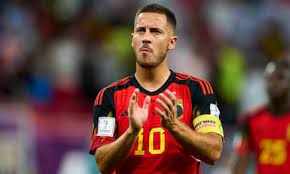 Belgium forward, Eden Hazard, has announced his retirement from international football. Hazard made the announcement on Tuesday on Instagram following Belgium’s shocking group-stage exit at the 2022 World Cup in Qatar.

He said in the post, “I have decided to put an end to my international career. The succession is ready.”

Although fellow Belgium star, Kevin De Bruyne, had said the team had no chance of winning the World Cup this year saying the squad is “too old,” the expectation from the number two national football team in the world surpassed exiting at the group stage.

Hazard was the captain of the Belgium squad and he played all three matches for the European side in Group F. Belgium beat Canada, lost to Morocco and played out a goalless draw with Croatia to finish third in the group.

The 31-year-old made his international debut in 2008 and scored 33 times in 126 appearances. He helped Belgium reach the 2018 World Cup semi-finals, where they lost to the eventual champions France, and beat England in the third-placed playoff.

Belgium coach, Roberto Martinez, also stepped down from his role after the disappointing exit in Qatar