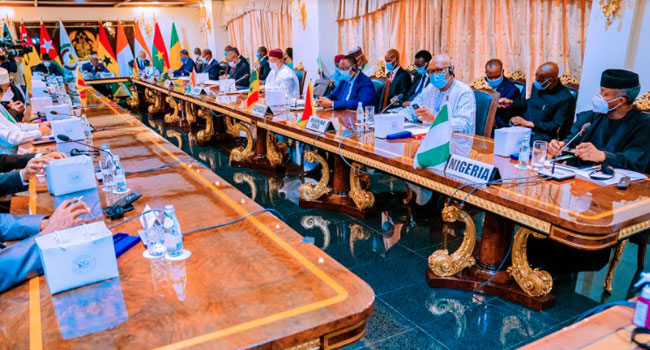 The Economic Community of West African States (ECOWAS) Heads of State have unanimously agreed to reject the forceful change of government in Mali.

Vice President Professor Yemi Osinbajo disclosed this on Tuesday while speaking after representing President Muhammadu Buhari at the extraordinary summit of the ECOWAS on the situation in Mali.

He said the region’s leaders agreed that the transition to democratic rule in Mali must take a maximum of 18 months and the transitional government should be heeded by a civilian.

The Vice President was accompanied by the Minister of State for Foreign Affairs, Mr Zubairu Dada, and is now on his way back to the country from Ghana.

The West African leaders said they hope to see a civilian-led transition government installed in Mali “in days” following the talks with the military junta that seized power in the fragile state last month.

ECOWAS slapped sanctions on the country after the putsch, including closing borders and a ban on trade and financial flows, and has called for elections within 12 months.

“We need a civilian leadership of the transition,” Ghana President Nana Akufo-Addo, who currently chairs ECOWAS, told journalists after hosting the meeting.

“The minute that leadership is put in place through the processes they themselves have agreed upon in Mali, the sanctions that have been placed against Mali will be lifted by ECOWAS.”

Akufo-Addo said that a mediator from the bloc would travel to Bamako in a week and that regional leaders wanted the process finished.

“I’m hoping that by the time he gets there these things would have been completed,” the Ghanaian leader said.

“We’re talking hopefully in days, not in weeks.”

ECOWAS had given Mali’s new military rulers until Tuesday to name a civilian president and prime minister to head a transitional government.

The junta missed that deadline but its leader Colonel Assimi Goita, who was appointed interim head of state, attended the talks in Ghana on his first trip abroad since his seizure of power.