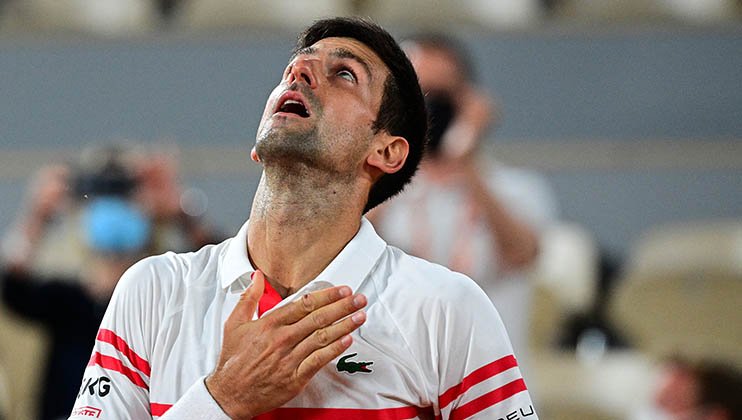 Serbia's Novak Djokovic celebrates after winning against Spain's Rafael Nadal at the end of their men's singles semi-final tennis match on Day 13 of The Roland Garros 2021 French Open tennis tournament in Paris on June 11, 2021. (Photo by MARTIN BUREAU / AFP)
Share
Facebook Twitter LinkedIn Pinterest Email WhatsApp
World number one Novak Djokovic can win his 75th career match at Wimbledon on Friday when he takes on American qualifier Denis Kudla for a place in the last 16.

The five-time champion, who is chasing a record-equalling 20th Grand Slam title, will be wary of Kudla despite his modest ranking of 114.

Kudla made the fourth round in 2015 where it took former US Open champion Marin Cilic to stop him while he also has four quarter-finals at grass court events to his name.

Djokovic will also be aware that the last time he fell to an American in the third round was in 2016 when Sam Querrey shattered his bid to win the third leg of a calendar Grand Slam.

Kudla, who was born in the Ukraine but moved to the United States with his parents on his first birthday, defeated Spanish 30th seed Alejandro Davidovich Fokina in the first round.

He then accounted for Italian veteran Andreas Seppi.

Djokovic made the third round for the 15th time at Wimbledon with a straight sets win over Kevin Anderson.

“I’m striking the ball really well in general,” said Djokovic who is again halfway to becoming only the third man in history — and first since Rod Laver in 1969 — to complete the calendar Slam.

Djokovic has a 2-0 career lead over Kudla, including a straight sets win in the Wimbledon second round in 2019.

– ‘Where’s the ball?’ -Former two-time champion Andy Murray, who put in a spectacular performance to beat qualifier Oscar Otte from two sets to one down on Wednesday, has a tough assignment against 10th seeded Denis Shapovalov of Canada.

Murray, now down at 118 in the world, is playing the singles event for the first time since 2017 having battled hip and groin injuries.

The 22-year-old Shapovalov is in the last 32 for the first time and will be well-rested having enjoyed a walkover when Pablo Andujar withdrew from their second round tie through injury.

“A fan of Andy’s, you know, to see him back and moving so well, especially those last two sets, how he turned it around,” said the Canadian.

“It felt like he was the player that he was a few years back.”

Women’s second seed Aryna Sabalenka, who has yet to make a Grand Slam quarter-final, faces a tricky third round match-up with teenager Maria Camila Osorio Serrano.

The 19-year-old Colombian came through qualifying to make her Wimbledon debut and knocked out 32nd seed Ekaterina Alexandrova in the second round.

Osorio, who left her Colombian home to live and train in Florida when she was just 11, won her first career title in Bogota this year.

Sabalenka played on Centre Court for the first time in her second round win over home player Katie Boulter.

“I didn’t know what to expect. When I stepped in, the first points, I was kind of like, Whoa, what’s going on? Where’s the ball? What should I do?”

Elsewhere, Ons Jabeur, the first Tunisian to get to the third round at the All England Club, takes on 2017 champion Garbine Muguruza.