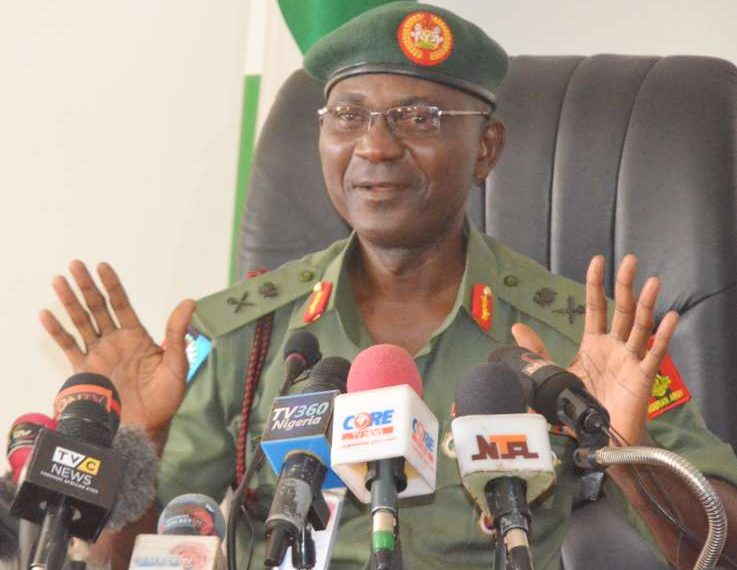 The Defence Headquarters (DHQ) has denied reports that Nigerian Navy personnel allegedly burnt down a pharmaceutical store in Ondo State.

The Coordinator, Defence Media Operations, Major General John Enenche, described the allegation being circulated in the media as “mischievous and unfounded” and urged the public to disregard false information.

Enenche said in the statement:

“The attention of the Nigerian Military has been drawn to the news going around in some quarters and online media about alleged burning down of a pharmaceutical store in Ondo state. The alleged publication is mischievous and unfounded. For the records, a fire outbreak was reported at about 7:30 pm on 16 April 2020 along Omonira Street, Igbokoda in Ondo State. The fire gutted a small medicine shop built with block and wood. It was reported that the owner, as with others, on sighting Nigerian Navy patrol vehicle while enforcing the 7:00 pm curfew enforcement imposed by the state, ran into the shop and exited through the back door of the shop. At that point, the shop was observed to have caught fire. The team sighted the fire and approached to find out the cause and render assistance.

“Some mischief-makers have alleged that the Navy Team set the shop on fire in order to create bad image for the service and the Armed Forces. However, while the fire was still raging, an Investigation Team from the Naval Base, along with the Department of State Service in Ondo State, visited the scene of the incident and discovered a camp gas with pot on it and a gallon close by. It was obvious the shop owner was cooking at that time of the incident and an inflammable substance (either kerosene or PMS) inside the gallon was close by. The spot inspection and estimate showed that, in the process of running out , the shop owner might have inadvertently tripped the naked flame from the cooking gas which triggered the fire incident. In addition, the wooden structure of the building aided the inferno.

“Thus, the general public is hereby requested to disregard the false information being circulated as published by some online media. It is advised that, Media Houses kindly verify information from appropriate quarters before publishing. We will continue to remain accessible to the media for corroboration as well as verification of relevant news items.”