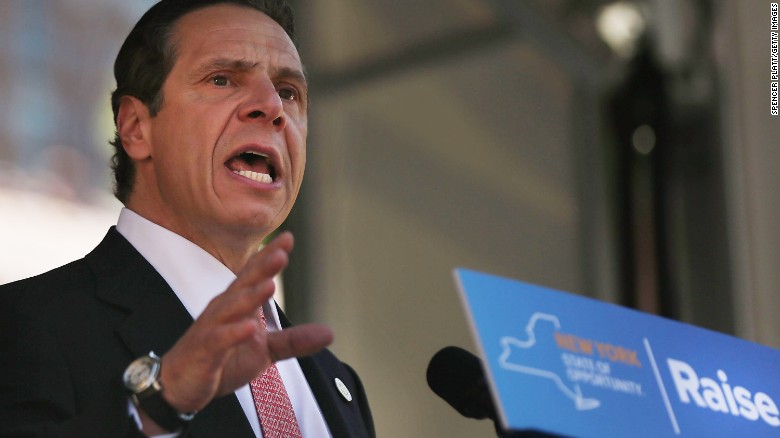 New York Gov. Andrew Cuomo signed legislation on Wednesday that will allow the state to prosecute people who have received a presidential pardon for the same offense, which could potentially affect associates of President Donald Trump.

The bill, which was passed by the state legislature in May, closes New York’s “double jeopardy” legal loophole that protected individuals who are pardoned by a president for federal crimes from being prosecuted at the state level for the same offense. The change goes into effect immediately and applies to future and past offenses, provided a plea has not been entered and a person has not already been tried.
“No one is above the law and New York will not turn a blind eye to criminality, no matter who seeks to protect them,” Cuomo, a Democrat, said in a statement. “The closure of this egregious loophole gives prosecutors the ability to stand up against any abuse of power, and helps ensure that no politically motivated, self-serving action is sanctioned under law.”
The new law potentially short-circuits Trump’s ability to shield his associates from prosecution, including former campaign chairman Paul Manafort, who was sentenced to more than seven years in prison on financial crimes stemming from special counsel Robert Mueller’s investigation into the 2016 campaign.
The New York Attorney General’s office, which has vowed to investigate Trump and his business dealings, said in a release the new law establishes an additional exception “that would ensure that New York’s criminal laws continue to apply to individuals who receive a presidential pardon and also have a connection to the president either by family or close professional relationship, or through a narrow set of other criteria.”
“This critical new law closes a gaping loophole that could have allowed any president to abuse the presidential pardon power by unfairly granting a pardon to a family member or close associate and possibly allow that individual to evade justice altogether,” New York Attorney General Letitia James said in a statement. “No one is above the law, and this commonsense measure will provide a reasonable and necessary check on presidential power today and for all presidents to come.”
The White House did not immediately respond to CNN’s request for comment.
The pardon bill allows for the prosecution at the state level of any individual who was employed by or served in the executive branch, served in a position subject to Senate confirmation, or worked for a presidential campaign or transition team, regardless of whether they had been pardoned or granted clemency by the president under which they served. It would similarly allow prosecution of presidential relatives regardless of pardon.
Republicans have opposed the bill, including New York State Assembly Minority Leader Brian Kolb, who said when it was passed that “the endless political grandstanding involved in targeting President Trump at a state level is a total waste of time, energy and taxpayer money.”
The Washington Post reported in August that Trump told officials he would pardon them if they broke any laws in attempting to finish construction on the wall at the US-Mexico border.
Share. Facebook Twitter Pinterest LinkedIn Tumblr Email WhatsApp