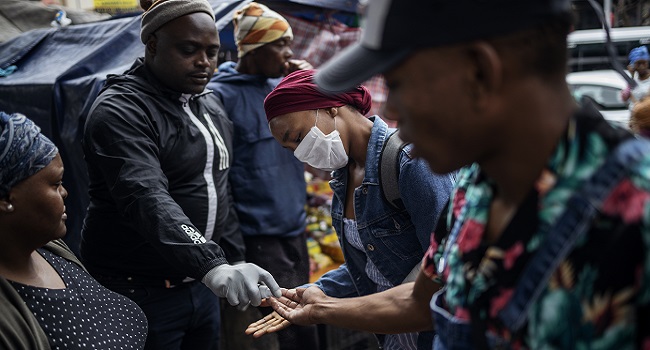 South Africa on Wednesday recorded its highest 24-hour increase in coronavirus infections to date, with 31 new cases taking the country’s tally up to 116, government announced.

Africa’s most industrialised economy is the most affected in sub-Saharan Africa and second-most impacted on the continent after Egypt, which has recorded 196 cases.

The country’s first coronavirus infection, confirmed on March 5, was detected in a man who had arrived from Italy — the new centre of a pandemic that has infected more than 19,000 people worldwide and killed over 7,800.

“As of this morning, 18 March 2020, South Africa now has 116 confirmed cases of COVID-19,” Health Minister Zweli Mkhize said in a statement.

Of the new cases announced this week, six were children aged five or under.

Most of the people who have tested positive in South Africa had recently travelled to highly-affected countries in Europe and the Middle East.

But at least 14 internal transmissions were detected this week, raising fears the novel virus could spread into overcrowded townships with poor access to sanitation and little scope for self-isolation.

“Now we are seeing transmission between people in South Africa,” said Lynn Morris, a senior executive at the country’s National Institute for Communicable Diseases.

“What we are trying to avoid is seeing those clusters spreading into the community,” she explained on local radio, adding that the “true rate of transmission” was still unknown.

President Cyril Ramaphosa declared a state of national disaster after numbers more than tripled over the weekend.

“It is spreading, so it is necessary that we close ranks as we stand together,” Ramaphosa told reporters after meeting with opposition political party leaders on Wednesday.

Yet he warned that the impact on the economy would be “quite devastating” and described the situation as “unprecedented”.