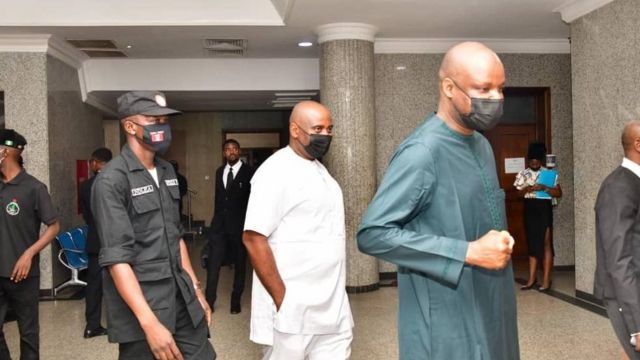 The court, in a ruling that was delivered by Justice Emeka Nwite, held that the suspended DCP failed to establish why its previous decision that ordered his remand at Kuje prison pending the determination of the case against him, should be set aside.

Justice Nwite said that the reasons adduced for the bail request had been addressed in the earlier application, which was denied.

It held that the fact that Kyari and four other police officers that are facing trial with him, did not escape when Kuje prison was recently attacked by insurgents, was not enough to prove that they would not jump bail once they are released from custody.

Justice Nwite dismissed Kyari’s argument that the Kuje jailbreak constituted an exceptional circumstance the court should consider and review its earlier ruling that denied him bail.

He held that the development the defendant relied upon did not fall within the purview of sections 162 and 163 of the Administration of Criminal Justice Act, ACJA, 2015, to warrant the court to vary its subsisting order.

More so, Justice Nwite held that since the NDLEA has not closed its case, both Kyari and his co-defendants could interfere with some of the vital witnesses or undermine their prosecution, if released on bail.

The judge subsequently fixed October 19, 20, and 21 for the resumption of the trial.