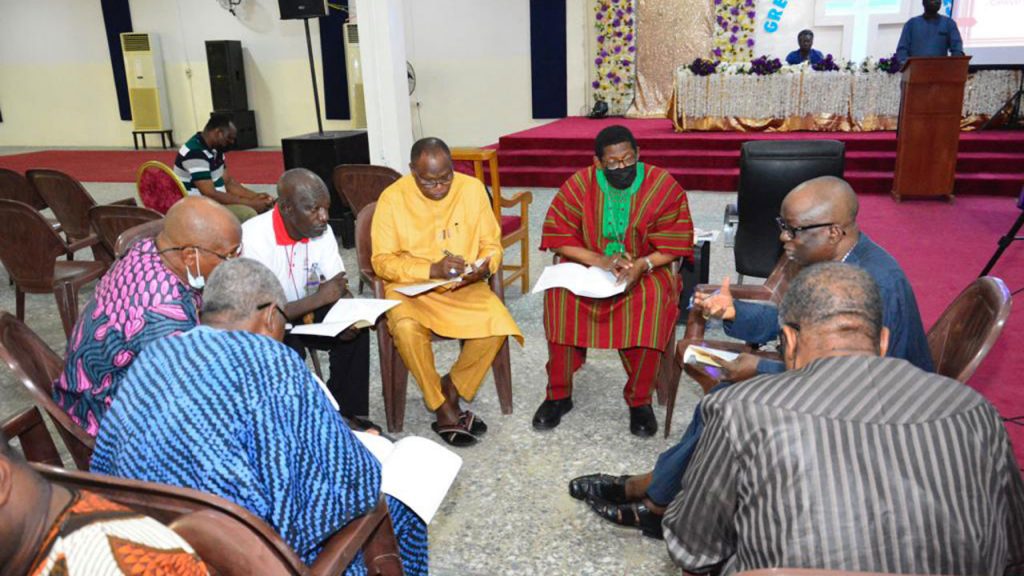 The meeting, with the theme: “Missions and the Future of the Anglican Church,” was hosted by the Diocese of Lagos West. It was aimed at reassessing the future of the Church, not just the Anglican Church, but Christianity in Nigeria and the rest of the world, especially in the light of challenges Christians are facing in the area of persecution and discrimination in Nigeria.

The Archbishops and Bishops took time to critically analyse and strategise for the Church’s future and missions. Part of the focus is realigning the church leadership, the clergy and laity and making a paradigm shift for missions.

Primate Ndukuba in his address said the Church’s future is missions and the task is simply evangelism. The DNA of the Church, according to him, is mission and the church must get back to its original mandate, which is raising and sending missionaries to all communities, both in and outside the country.

The El-Rehoboth Global Leadership team, led by Canon Timothy Olonade, brought the church’s attention to such issues as raising young men and women for missions in both formal and informal training, as well as raising catalysts for missions. This is creating the awareness and equipping all church members to make missions happen in their areas of various endeavours, as well as let Christians know how to be witnesses for Christ in whatever they do and wherever they find themselves.

The Church fathers explained that, with a young population of over 170 million below the age of 35 in Nigeria, the church’s future rests on their capacity to effectively serve God and humanity. According to them, the church must take a serious look at youth development and economic empowerment, as well as their spiritual well-being. Discussions centred around skill acquisition, discipleship of Christian youths, agriculture and sourcing finances from Central Bank of Nigeria through various available packages. They tasked Dioceses to domesticate all plans to suit their different communities. The Church fathers also examined the syncretism that is fast becoming a major problem in many churches and some regions of the country.

A resource person, Barr. Emeka Nwankpa, noted that Nigerians are intrinsically cultural and very religious, but many times people, even pastors and church leaders, bring cultural spiritism into the church and set up gods and idols in sanctuaries, which are completely unacceptable to God. The church fathers, while reiterating the sanctity of the scriptures and total dependence on scriptures, admonished Christians to uphold only the scriptures. They appreciated customs and cultures that glorify God, project people’s identities, rich histories and heritage, but rejected spiritism and demonic influences that battle against the scriptures, worship and lifestyles, saying they must be cast out of all church practices.

Other resource persons included Bishop Chidi Oparaojiaku and Elder Jonathan Onigbinde. Oparaojiaku reiterated the need for constant evaluation of both human and financial resources to ensure that the best and effective people are put in position to perform and achieve maximum result in every task with available resources.

Onigbinde analysed how best the church could source and raise needed funds for missions and evangelism, which include looking inwards to raising stakeholders in specific missions areas, and recruiting professionals in the communion who are able to put in their expertise to make things happen.

At the end of the mission consultative meeting and episcopal synod held in Lagos from April 19th to 23rd 2021, they elected an Archbishop and Two Bishops as follows:
1.

The Bishop of the Diocese of Ikwerre and Vice Chairman of the ACNNTV Board of Management, the Rt. Rev’d Dr. Blessing C. Enyindah JP. as Archbishop Elect of the Ecclesiastical Province of Niger Delta.
2.

The Venerable Prof. Nnoyi Egbe of Christ Church Deanery Calabar as the Bishop Elect for Diocese of Calabar.
3.

‘Jesus: The Grace And The Truth: Biblical Model For Effective Leadership’ || By Bishop Dapo Asaju