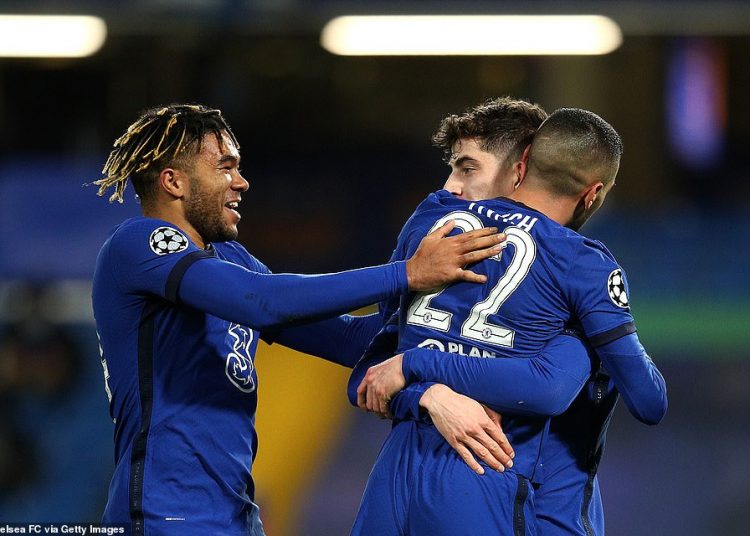 Chelsea took another big step under Thomas Tuchel as the Blues saw off Atletico Madrid 2-0 at Stamford Bridge to cruise into the Champions League quarter-finals.

Hakim Ziyech’s first-half goal and an injury-time effort from Emerson Palmieri were more than enough for Chelsea to seal a deserved victory on the night – and the tie overall – with Diego Simeone’s Atletico rarely troubling Tuchel’s defence over the 180 minutes.

Chelsea headed into the second leg of the round-of-16 tie ahead thanks to Olivier Giroud’s stunning overhead kick in Bucharest, leaving Atletico with it all to do in west London.

Simeone’s LaLiga leaders felt they should have been awarded a penalty that could have changed the complexion of the tie early on, but Daniele Orsato deemed that Cesar Azpilicueta’s tug on Yannick Carrasco was not worth of a spot-kick – nor the inevitable red card that would surely have followed.

Atletico were left to rue that decision as Chelsea soon took the lead, with Ziyech tapping home a lightning counter attack to put Chelsea 1-0 up on the night and in control at 2-0 on aggregate.

The Morocco forward converted from Werner’s cross, after the Germany star had grafted hard to launch the attack in the first place.

Werner sprinted wide to block Trippier’s attempted cross after a free-kick, with Havertz latching onto the loose ball and sending it back into Werner’s path.

The former RB Leipzig hitman raced away and kept his cool to feed Ziyech at the far post, who slotted home.

Chelsea held on to that lead until the break, and such was Atletico’s impotence in attack that Luis Suarez was withdrawn before the hour-mark as the visitors vainly went in search of a route back into the game.

Atletico’s frustrations boiled over late on as Stefan Savic was shown a straight red card for an elbow on Antonio Rudiger, and with it any faint hopes of a comeback were extinguished as substitute Emerson scored with his first touch off an injury-time counter.

Given Atletico’s reputation heading into the game, the ease with which Chelsea dispatched them over two legs will mark the Blues out as one of the teams to avoid in Friday’s quarter-final draw.