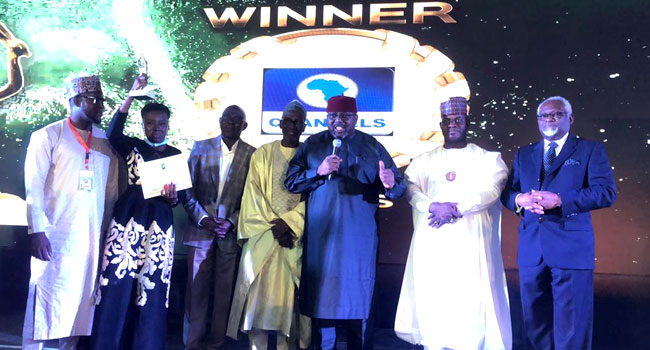 Channels Television has won the Nigerian Media Merit Award (NMMA) for Best Television Station of the Year for the 14th time.

Extending its record in the category, the award-winning station claimed the prize on Sunday morning at an event held in Lokoja, the Kogi State capital.

Channels Television’s Controller of Programmes, Mr Ambrose Okoh, and some senior staff members received the award on behalf of the organisation.

Organisers handed out awards in more than 51 categories to various winners, with a majority in the print category.

Saturday’s event was well-attended with the Kogi State Governor, Yahaya Bello, as well as other dignitaries and media practitioners – veteran and young – present.

The award for Best TV Station, which recognises media excellence in the country, is one of the numerous recognitions Channels Television has received in Nigeria and globally for its programming, with an audience of over 20 million people within and outside the country.

Prior to the award bagged on Saturday, Channels Television last won the Best Station of the Year for 2018.

Ahead of the four-day ceremony which started on Thursday, organisers had said a total of 1,050 entries from 731 journalists across the country were received for various categories, including print and broadcast.

The number of entries received for the year 2021, according to them, is one of the highest figures ever since the inauguration of the award in the early 90s.

At the 29th edition of the Award programme, awardees were recognised for their work in 2020 following an assessment by the Panel of Assessors (POA) of NMMA.

“The exercise lasted for about six weeks from mid-June to the end of July 2021,” said a statement released in early October. “Notwithstanding the effects of the pandemic in the year 2020, a record-breaking 1,050 entries from 731 entrants were received from across the nation, making it one of the largest number of entries received since inception of the NMMA in 1991/92.”