CAN Berates FG over Failure to Complete Lokoja -Abuja Highway 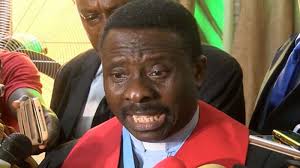 The President of Christian Association of Nigeria (CAN), Dr. Samson Ayokunle has described the inability of the federal government to complete the over 200 kilometres Abuja-Lokoja Highway that has been under construction for 15 years as a national shame.

Ayokunle disclosed this while speaking at the official dedication of Government House Chapel in Lokoja for Christian worshippers, which was built by the Kogi State Governor, Mr. Yahaya Bello.

He explained that the lukewarm attitude towards the construction of Abuja-Lokoja Highway remained a sore thumb in the life of various leaderships at the federal level and stressed that the country might not see desired change until its leaders imbibed the spirit of sincerity and fear of God.

“The Lokoja-Abuja Highway is a shame to the country. Do something and remove this shame. Constructing a 200kms road for 15 years is a shame,” he said, adding that the All Progressives Congress administration should not fail where others have failed.

Ayokunle said that Nigeria would join the league of great nations if its human and materials resources would be properly harnessed to dust off the present hardships that have bedeviled the nation.

He stated that oppression would take the centre stage in any society that is devoid of justice, noting that Nigeria needed justice, fairness and mutual respect for one and another in all segments of its society.

The CAN’s president noted that the days are gone when public servants could use old trick to deceive people and get away with it because the current generation of Nigerian are sophisticatedly educated.

He said: “While practicing democracy, let us use our native wisdom. Where you are included, you see government as your own and where you are excluded you agitate to right the wrongs. We need justice, fairness and mutual respect in Nigeria.”

Bello, who was represented by the Deputy Governor of Kogi State, Mr. Edward Onoja, thanked God for giving them the wisdom and strength to construct a chapel for Christian denomination in the state’s seat of government.

He stressed that the adherents of various religion, particularly Moslems, Christians and traditional worshippers abound in every family setting in the state and assured that government would be bold to rectify any policy that caused dissatisfaction in the society.

“That is what the present administration of Yahaya Bello has done, by constructing the Government House Chapel for Christian denomination,” he said, adding that people should not allow their grievances to degenerate to violence should resort to dialogue to resolve issues to the benefits all.