As Coronavirus Rages, Hundreds Of Nigerians Are Stranded In Transit Camps In Niger 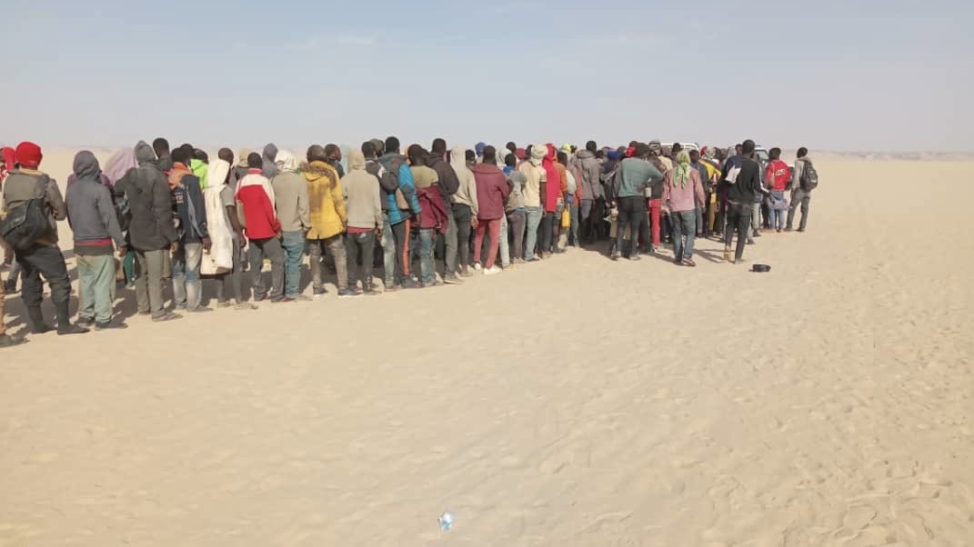 On April 2, the International Organisation for Migration rescued 256 persons in the arid northern Niger.

The trafficked persons were abandoned by their traffickers close to the Niger-Libya border, dehydrated and desperately in need of food. A baby was among those rescued, IOM’s Chief of Mission in Niger, Barbara Rijks, said.

All the rescued persons were transported from Dirkou to Agadez, where they were placed in coronavirus quarantine.

Among them were 104 Nigerians, who were Europe-bound despite their intended destination being caught up in the throes of the coronavirus pandemic.

Currently, there are about 2,371 people – mostly Nigerians, Guineans, Cameroonians and Malians – camped in six IOM transit centres in Niger.

A spokesperson for IOM in Nigeria said the UN agency was already in talks on how to facilitate their return to their home countries.

“Niger has accepted to open a corridor and now we are discussing with the countries of origin of all the almost 10,000 stranded migrants so they can open one as well,” Jorge Galindo, as a spokesperson for IOM Mission in Nigeria, told The Guardian on Thursday.

Coronavirus not a problem for traffickers
Rijks said the 250 migrants rescued early in April were abandoned by the traffickers because of restrictions on movement in war-torn Libya due to coronavirus.

The country, however, announced a 10-day lockdown on April 16. Niger, where they were abandoned, has closed its borders due to the pandemic. The World Health Organisation said 657 cases of the virus have been confirmed in the country and 20 fatalities recorded as of April 22.

But despite the border closure, curfews, travel bans and other forms of restriction in place in Niger, traffickers still find a way to smuggle migrants in.

“While the borders are officially closed, we still see migrants arriving in Niger from neighbouring countries that need to complete 14 days of mandatory quarantine,” said Rijks. “This, together with the many other migrants stuck in IOM’s transit centres in Niger, is putting an enormous strain on the limited resources and capacities of the Government of Niger and IOM.”

IOM said it may be difficult to house all the 2731 migrants at the transit centres for long amid worries about the impact it will have on local communities and the migrants themselves.

IOM said it was working with the Nigerien Government and diplomatic missions of the countries of origin of the migrants on the creation of humanitarian corridors so that migrants who have completed the isolation and did not test positive for coronavirus can return home.

Galindo said he was not aware of any feedback from relevant Nigerian agencies – such as the National Emergency Management Agency, Nigerian Immigration Service and the National Commission for Refugees, Migrants and Internally Displaced Persons – that IOM usually interfaces within such situations.

But the director-general of National Agency for the Prohibition of Trafficking in Persons Dame Julie Okah-Donli told The Guardian that the ministries of Foreign Affairs, Humanitarian Affairs, Health, NAPTIP, NEMA and NCFRMI are working with IOM to bring the Nigerians back.

She said an air corridor is being considered for their return of the lockdown.

“we’ve asked for further disaggregated information on these migrants from the Nigerien authorities,” she said.

Okah-Donli said there are also Nigerians in Mali and “a few other places” that are also being considered.

“One major consideration is that we have to have isolation facilities to accommodate more than 200 persons,” Okah-Donli said.

Changing the mode of recruitment
In a video posted to her Twitter handle on Thursday, Okah-Donli acknowledged that the pandemic has only made human traffickers change means of reaching their victims.

On Thursday, her agency helped arrest a Lebanese resident who advertised the sale of a Nigerian domestic worker on Facebook.

“Human traffickers have online to ply their ugly trade because of the lockdown occasioned by the COVID-19 pandemic,” Okah-Donli said in the video.