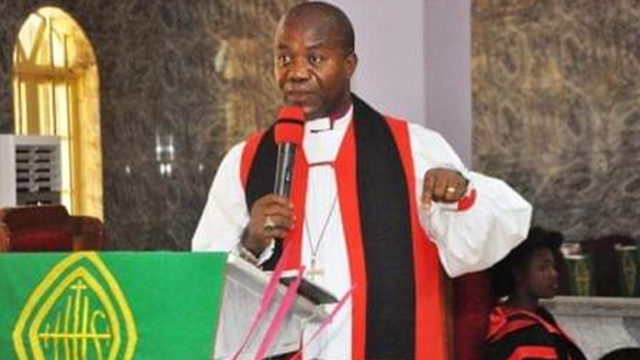 As part of preparations for the 3rd session of the 4th synod of the Anglican Diocese of Amichi, the Bishop, The Rt. Rev’d. Ephraim OkechukwuIkeakor has embarked on inspection visit to Ebenezer Church Unubi in Nnewi South LGA of Anambra state to ascertain their level of preparedness as host.

Addressing the media shortly after inspecting facilities for the event, Bishop Ikeakor highlighting on the theme of the synod-“Do Not Be conformed To This World” as taken from the book of Romans12:1-2,BishopIkeakor noted that so many Christians today are becoming like the world in many respects instead of being the light of the world.

The cleric expressed dismay at the level of conformity and compromise among Christians today contrary to biblical injunctions. This according to him informed the choice of the synod theme. The Prelate stated that Christian lifestyle should be the model and module for the society at large.

Rt Rev Ikeakor who was full of gratitude to God for helping the diocese on many fronts took the opportunity to showcase developments in the diocese in the last one year.

He said the School of Nursing which is part of the College Of Nursing Sciences has been fully accredited by the Nursing and Midwifery Council of Nigeria. While expressing the hope that the school of midwifery project will soon be completed, the cleric also acknowledged equipment of the Diocesan Hospital Amichi with state of the art medical facilities.

He hinted that the diocese has plans of establishing a college of Education soon and also called for the return of Teachers Training Institutes to improve the fallen standards of Education in Nigeria.
Speaking on challenges facing the country even as she celebrates 60th Independence anniversary, Bishop Ikeakor has canvassed for the restructuring of Nigeria as the panacea for peaceful coexistence and unity among the several ethnic groups.

According to him, restructuring is the safest and most morally upright approach to solving the myriads of problems facing Nigeria.

He also called on Igbo Leaders to eschew selfishness and work for common good of the people as the quest for Igbo presidency is not the only means for achieving meaningful development in the region.

Speaking during the inspection visit, the chairman of the synod planning committee Sir Sunday Anekwe said the Anglican Communion in Unubi is fully prepared to host the synod which will commence on Wednesday 14th and end on Sunday 18th October 2020.

The third session of the fourth synod of the Diocese of Amichi will feature the presentation and launching of the Bishop’s Address on Saturday 17th and the Synod thanksgiving service and launching of Diocesan development projects on Sunday 18th October, 2020