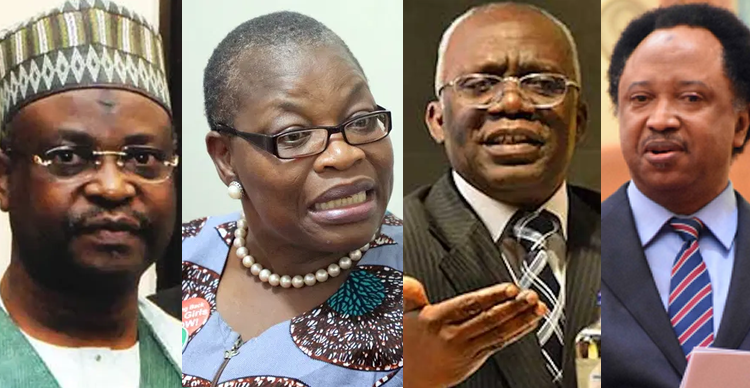 Concerned political leaders drawn across various political parties under the aegis of National Consultative Fronts (NCF) on Tuesday called on all former presidents, heads of states, National Assembly presiding officers to convene with the view to save Nigeria from anarchy and unwanted civil war as well as to direct the country’s endowments toward erecting a truly prosperous and harmonious nation.

The group also urged all political parties, politicians and political support groups to suspend forthwith all campaigns and ambitions for 2023 elections should for now take the backstage, as well as all political activities that are not geared towards stemming the tide of insecurity and moving the country to normalcy.

The clarion call was contained in a communiqué read by its leader, Dr Olu Agunloye, after the emergency national intervention meeting of leaders of conscience in Nigeria held in Abuja, which was jointly signed by former Speaker of the 5th session of the House of Representatives, Hon. Ghali Umar Na’abba; Prof. Pat Utomi and Dr Hakeem Baba Ahmed.

The group also urged all government agencies and functionaries and politicians to shelve all political activities towards 2023 election preparations and timelines, noting that the socio-political landscape has been fast deteriorating and the spirit of sectionalism has spread across Nigeria coupled with internal revolts and separationism have reached an advanced stage.

While calling for urgent need to facilitate a credible alternative peoples’ movement capable of saving and rescuing Nigeria from insensitive and self-serving politicians, they canvassed that all power politics of 2023 should be downplayed to focus the effective mobilization of Nigerians towards national cohesion and stability through a popular process of national consultations capable of facilitating new people’s constitution.

While expressing grave concern over the “fragile state of Nigeria,” Dr Agunloye explained that the group convened to review the current Nigerian situation with intention of creating hope and strategies for restoring sanity, harmony, and stability to our country to halt the slide into dangers of anarchy and civil war.

According to him, members of the Front also reached a “consensus that Nigeria has manifested inability of the government to protect the citizens or prevent pervasive scale violence and emergent insurgencies. The country is confronted with multiple internal insurrections, ethnic divisions and strife, and separationist agitations in all the six geopolitical zones of the country.”

They also underscored the need for amendment of the current Electoral Act which they described as “critical and crucial to foster just and justiciable democratic process and to create faith and trust in the leadership.

“The initiative will pursue popular democratic constitutional resetting and remaking of Nigeria to give the country a new popular constitutional template that will provide the Nigeria peoples with a new political structure and national legal framework that can essentially make politics less violent and less corruptible but service-oriented and values-driven for mass prosperity.”

In the bid to save Nigeria, they resolved to “fight for the independence of the judiciary and legislature for the Executive arm especially the governors can confine selves to basic functions and all arms can do their jobs efficiently and effectively.

In the bid to achieve its set objectives, they resolved to engage and interface with relevant authorities, including the Nigerian presidency and the leadership of the National Assembly to impress on them the will and yearning of Nigerians for a new Nigeria that works for all and to bridge growing gaps and deficits in faith and trust between government and ordinary Nigerians to prevent political sabotage and total breakdown of law and order.

They also urged Federal Government and the National Assembly to appropriately use the ongoing constitution amendment process not only to douse tension but to cause amendments that will cause short term peace solutions and provide for Referendum/Constituents’ Assembly in Sections 8 and 9 of the existing 1999 constitution, without fail, to enable Nigerian citizens a leeway to taking full ownership of their Constitution as well as allow them to exercise their inalienable constitutional sovereignty over the country.

“That considering a large number of Nigerians in diaspora, we have decided to set up Coordinating Peace Bodies in North America, Europe, Asia and African sub-region to find routine and diplomatic ways on how peace can return to Nigeria.

“That online recruitment and registration of members, players and promoters as well as establishing of Project Quarters in Nigeria, Africa, Europe, North America etc. have been authorized to commence immediately.”