After George Floyd’s death, a groundswell of religious activism 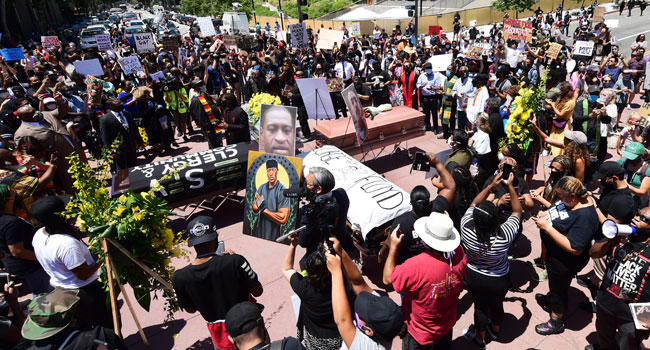 George Floyd’s death has triggered a groundswell of outrage and activism by religious leaders and faith-based groups across the United States, reminiscent of what occurred during the civil rights movement in the 1960s.

Conservative and mainstream religious leaders are joining with Black churches, progressive Catholics and Protestants, Jewish synagogues and other faith groups in calling for police reforms and efforts to dismantle racism.

Floyd, a 46-year-old African-American man, died after a white Minneapolis police officer pressed his knee into Floyd’s neck for nearly nine minutes on May 25. The officer has been fired and charged with second-degree murder, but protesters and activists around the world are pushing for deeper change.

There is a new “breadth and depth” in the faith-based response, said one participant, Rabbi Jonah Dov Pesner, director of the Religious Action Center of Reform Judaism, citing a great hunger for connection after months of social distancing and lockdown because of the coronavirus pandemic.

Progressive religious groups had an important role in shaping the emerging movement, much as they did in the civil rights movement, but today’s actions are attracting a more diverse set of participants, Pesner said.

Republican Donald Trump won the 2016 presidential election with strong support from evangelical Christians and Catholics. But Floyd’s death and Trump’s criticism of protesters may be a factor when members of those religious groups go to the polls in November.

While federal tax rules prevent houses of worship from taking an overt partisan stance, clergy are not banned from expressing their personal opinions.

Trump was sharply criticized by mainstream Catholic and Episcopal leaders after protesters were forcibly cleared for a staged photo of him last week in front of Washington’s historic St. John’s Episcopal Church across from the White House.

Some right-leaning religious leaders have since called him out or joined protests, unlike in the 1960s when some white evangelical leaders, including the Rev. Billy Graham, did not here take part in the civil rights movement.

Televangelist Pat Robertson chided the president last week for threatening to send in military troops if governors did not quell violent protests. “He spoke of them as being jerks. You just don’t do that, Mr. President. It isn’t cool!”

Joel Osteen, the senior pastor from Texas megachurch Lakewood, marched with protesters last week in Houston. “We need to stand against injustice and stand with our Black brothers and sisters,” said Osteen.

Some churches have also stepped up efforts to boost voter registration in recent weeks, much as churches did in the 1960s.

Data collected after Floyd’s death from the non-partisan Public Religion Research Institute showed here 37% of white Catholics held favorable views of Trump, down from 49% in 2019, and a drop from the 60% who voted here for Trump in 2016.

Religious leaders held an online eulogy for Floyd and interfaith service on Sunday, here staged a day of fasting on Monday, and observed eight minutes and 46 seconds of silence to mark the exact amount of time Floyd was held down as he pleaded: “Please, I can’t breathe.”

A June 20 online “assembly” including 16 religious denominations seeks to revive the “Poor People’s Campaign” launched after the assassination of civil rights leader Martin Luther King Jr. in 1968. Subtitled “A National Call for Moral Revival,” it will also focus on Floyd, organizers say.

“We are in a deep moral crisis,” said the Rev. William Barber, pastor of Greenleaf Christian Church in Goldsboro, North Carolina, who is one of the key organizers.

“What we have to do at this moment is not only address what happened to George Floyd, but the interlocking problems of systemic racism, police brutality, the lack of healthcare, poverty and militarism,” he said.

Najuma Smith-Pollard, a Black pastor and community activist in Los Angeles, said the protests had already triggered action that once seemed impossible – the Los Angeles mayor yanked $150 million from the police department’s budget and diverted it to programs for youth jobs, healthcare and trauma recovery.

“I don’t think it’s a blip,” she said. “Too many things are at stake and too many people are engaged. This is no longer a local matter – it’s national, it’s global.”