Afghan Woman Delivers A Baby Girl On US Evacuation Flight 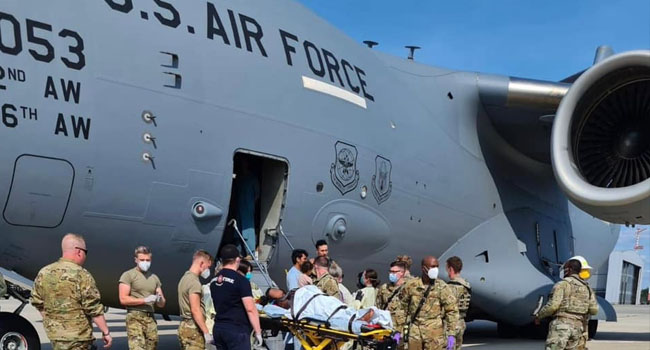 An Afghan woman has given birth to a baby girl just after touching down aboard a US evacuation flight.

Photos of the woman was posted on The US Air Mobility Command social media platforms in the early hours of Sunday.

She delivered her baby in the cargo bay of a U.S. Air Force C-17 aircraft moments after landing at Ramstein Air Base, Germany on Saturday.

“During an evacuation flight from an Intermediate Staging Base in the Middle East, the mother went into labor and began experiencing complications due to low blood pressure,” the Air Mobility Command said.

“The aircraft commander made the decision to descend in altitude to increase air pressure in the aircraft, which helped stabilize and save the mother’s life. Upon landing, Airmen from the 86th MDG came aboard and delivered the child in the cargo bay of the aircraft. The baby girl and mother were transported to a nearby medical facility and are in good condition.” The flight had Afghans from an intermediate staging base in the Middle East in it.

Thousands of Afghans have fled the country, fearing for their safety since the Taliban took over the Middle East nation last week. They crowded onto the tarmac in the hope of catching any flight out, on Monday.

Dramatic footage posted on social media showed a scene of chaos on the runway, with civilians frantically clambering up an already overcrowded and buckling set of airstairs.

It was a desperate bid to board a parked passenger plane and escape the city a day after the government’s collapse.

Those who successfully climbed the stairs helped others up, while some hung from the stair railings with their hands as a crowd of hundreds watched on.