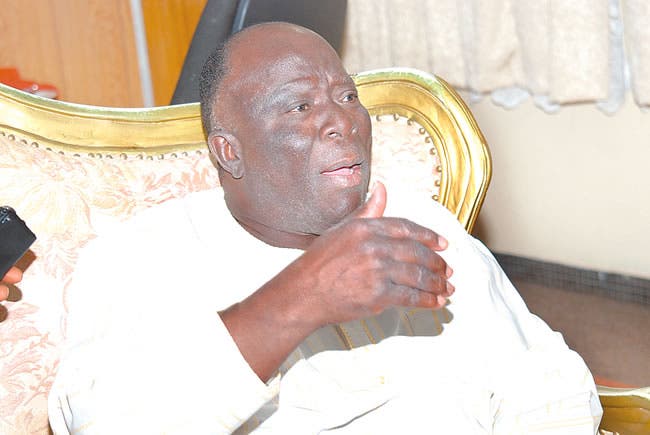 The pan-Yoruba sociopolitical group, Afenifere, on Tuesday, found errors in the claim by northern governors that their southern counterparts are not meant to have taken another resolution on restructuring and total ban on open grazing, having decided upon the issues already at the Nigeria Governors’ Forum (NGF).

Chief Ayo Adebanjo, the leader of the group,  reacting to the position of the Northern Governors’ Forum, as stated by its chairman and Plateau State governor, Simon Lalong, said there was nothing wrong with the call by southern governors who met in Asaba, Delta State, to ban open grazing, while also demanding for restructuring of the country.

Reacting to the positions of the southern governors, their northern counterparts expressed disappointment over resolutions of the meeting, saying the ban on open grazing had been resolved at the meeting of NGF and passed to the presidency. Speaking on “Radio Now 95.3 FM Lagos,” Lalong said most of the issues raised by the southern governors, especially the banning of open grazing had been discussed.

“Many of the issues raised are not new to the Nigeria Governors’ Forum because we had raised the issues before, particularly the issue of open grazing. Northern governors met on this issue and raised a communique. That communique led us to convene Governors’ Forum meeting. It was adopted and we took the resolutions to the president that we are against the current system of open grazing,” he said.

He added that in view of the growing urbanisation and population of the country, all the governors agreed to sensitise herdsmen on the need to adopt new method of herding which was ranching or other acceptable methods.

He queried: “As I am talking to you, many of the states have put up the process of establishing ranching law. Plateau State has sent a bill to the state assembly on ranching, Kaduna is already doing that, Nasarawa is preparing to do that. So at what stage did we say we are encouraging open grazing?”

The Plateau State governor said if the National Livestock Transformation Plan (NLTP) has been well accepted and put on ground by now, the country would not be talking of farmers/herders clashes. “To me, there’s no need for southern governors to begin to bring it up as an issue again because all of us have adopted the banning of open grazing. After the northern governors’ meeting, we presented it to the Nigeria Governors’ Forum and tabled it before the president. It is not a new thing,” he stated.

He said the position of the southern governors had not helped the collective decision, adding that it was out of place to take the same issue to the region for discussion.

On restructuring, Lalong said the northern governors had set up a committee on it, headed by the governor of Sokoto State with Plateau State deputy governor as the secretary. He also said herdsmen are the major reason for insecurity in the country, as he cited the militancy in the South-South and call for secession by the Indigenous People of Biafra (IPOB). Carpeting his stand, Adebanjo, speaking on telephone with the Nigerian Tribune, said the 17 southern governors did nothing contrary and never escalated any issue. He said, they rather emphasised the urgency of the matters, as no action had been taken by the presidency to which, according to Governor Lalong, earlier resolution of the NGF had been submitted.

“That is their decision, there is nothing wrong about it. If it is true that all the governors had decided on the issues, what is wrong with that? They have not done anything contrary to what they had decided upon earlier, rather, what they are doing is emphasising on those matters because of the urgency,” Chief Adebanjo said.

“After they had taken the decision on the issue at the NGF level, has government acted on it? Once there has not been any action on it, the governors have the right to repeat it,” he further stated.