‘A Giant Has Fallen’: More Tributes Pour In For Desmond Tutu 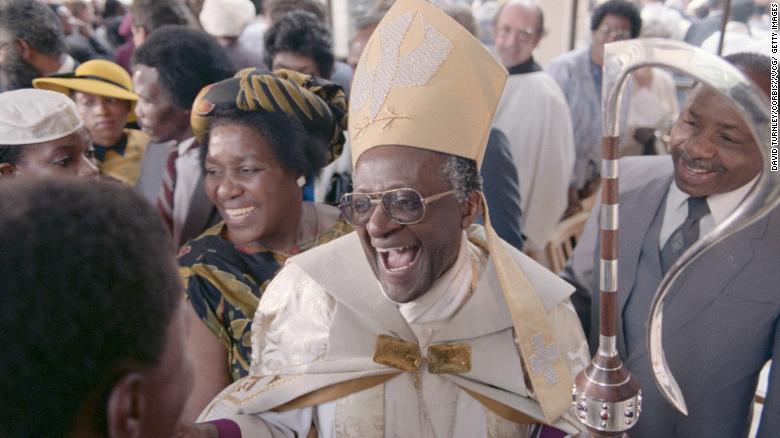 Former US president Barack Obama, the nation’s first Black leader, called Tutu “a mentor, a friend, and a moral compass” who could “find humanity in his adversaries”.

“A universal spirit, Archbishop Tutu was grounded in the struggle for liberation and justice in his own country, but also concerned with injustice everywhere,” said the fellow Nobel Peace laureate in a statement.

US President Joe Biden said he was “heartbroken” to learn of the archbishop’s death.

The Vatican said in a statement that Pope Francis was saddened and offered “heartfelt condolences to his family and loved ones”.

“Mindful of his service to the gospel through the promotion of racial equality and reconciliation in his native South Africa, his holiness commends his soul to the loving mercy of almighty God.”

“We are all devastated,” said Mary Robinson, chair of The Elders, a group of global leaders working for peace and human rights that Tutu co-founded.

“He inspired me to be a ‘prisoner of hope’, in his inimitable phrase,” said Robinson, a former president of Ireland.

The Elders said in a statement they had “lost a dear friend, whose infectious laugh and mischievous sense of humour delighted and charmed them all”.

“A man of faith convinced in the power of reconciliation through restorative justice,” said Moussa Faki Mahamat, the current chair of the African Union.

Tutu, he added, “was a true shepherd of peace”.

Kenyan President Uhuru Kenyatta said Tutu’s passing was “a big blow” not only to South Africa but to the entire African continent.

“Archbishop Tutu inspired a generation of African leaders who embraced his non-violent approaches in the liberation struggle,” he said.

“We thank God for his life — a purposeful life truly lived in the service of humanity.”

United Nations chief Antonio Guterres called Tutu “a towering global figure for peace and an inspiration to generations across the world”.

“During the darkest days of apartheid, he was a shining beacon for social justice, freedom and non-violent resistance,” Guterres said in a statement.

Queen Elizabeth II called Tutu a “man who tirelessly championed human rights in South Africa and across the world”.

“I remember with fondness my meetings with him and his great warmth and humour,” she said in a statement.

British Prime Minister Boris Johnson called Tutu “a critical figure in the fight against apartheid and in the struggle to create a new South Africa”.

He “will be remembered for his spiritual leadership and irrepressible good humour,” Johnson tweeted.

“His struggle for the end of apartheid and for reconciliation in South Africa will remain in our memory,” he tweeted.

Archbishop of Cape Town Thabo Makgoba said the life of Tutu, a “deeply spiritual person”, should be celebrated.

“He named wrong wherever he saw it and by whomever, it was committed. He challenged the systems that demeaned humanity.”

“A man who gave his life to freedom with a deep commitment to human dignity,” European Council President Charles Michel wrote on Twitter.

“A giant who stood up against apartheid. You will be deeply missed.”

“Archbishop Tutu was a voice for the oppressed and a tireless advocate for human rights — and the world is a better place because he was in it,” Canadian Prime Minister Justin Trudeau wrote on Twitter.

Norwegian Prime Minister Jonas Gahr Store paid tribute to a man who “showed the power of reconciliation and forgiveness”.

Highlighting Tutu’s Nobel award, he added: “Never has a peace prize been so fitting.”