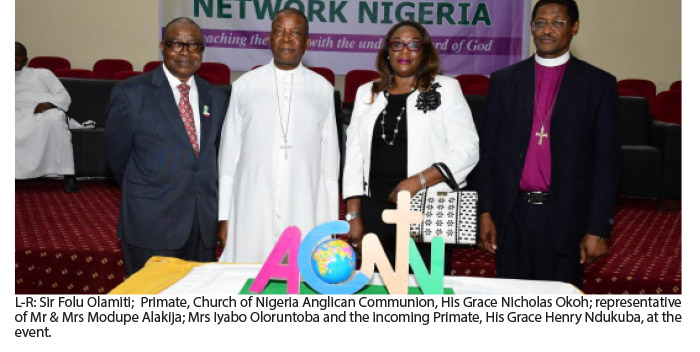 It was also an opportunity to unveil the new ACNN logo, as well as their new office space for the reinvigorated digital faith-based broadcasting outfit.

ACNN, as gathered, is a dedicated digital television channel that, expectedly, would add vibe to digital evangelism through specialised church programmes that would propagate the Gospel of Jesus, with focus on Anglican doctrine.

Over N300 million was said to have been spent in setting up the digital television station, with world class digital broadcasting equipment procured for the purpose of broadcasting.

The Primate, Church of Nigeria (Anglican Communion), Nicholas Okoh, alongside the Primate-elect, Henry Ndukauba, led other clergymen to the event, which culminated in the dedication of the new offices and newly procured broadcasting equipment.

Primate Okoh recalled with nostalgia, the unfriendly response he received from the church leadership and other people when he informed them about the cost of establishing the television station that is solely dedicated to Anglican Church: “I didn’t despair because of my strong believe that it was possible. In fact, people became more afraid when a contractor made a presentation at a meeting in Ikeja, Lagos, few years ago. I didn’t loose sleep rather I began moves to raise funds to start with.

“We called for help from philanthropic church members and we got positive response from some members. The largest response was from the Alakija family (Folorunsho Alakija). We invited them for a meeting in Abuja. After the meeting, they became more convinced that we are serious about the project. They offered us N250 million to add to N100 million that we had already raised. That was how we kick-started the project with N350 million.

“The media space seems to be saturated with unpalatable and unholy things which, obviously, add little or no value to the life but corrupt the more. We are here to use this platform to propagate the Gospel of Jesus and saturate the airwaves with words of hope and life.”

After the shocking story which drew the attention of guests at the event, the Primate accompanied by the Primate-elect, took an assessment tour of the new offices and newly procured broadcasting facilities. He laid hands on the equipment and invoked the presence of God on the entire facilities and the building. He prayed for divine protection, wisdom, ideas and creativity mind of people that would manage the equipment.

He obliged the employees and would-be employees to get themselves acquainted with the objective and idea behind the establishment of the television station so they don’t miss track which may attract sanctions.

Okoh reminded ACNN management of the need for revenue generation, even as he assured them of continued support through prayers, marketing, and regular financial support when the need arises.

ACNN board chairman, Sir Folu Olamiti, said the official launch of the equipment and dedication of ACNN new office was the joy of years of effort by the leadership of the church, and was grateful to God for success achieved thus far.

He confessed that to set up a television station in Nigeria requires a lot of efforts and resources: “With what I saw during this period, I have come to respect people who run television stations. The journey is not for the weak. But once you can transmit to viewers, then you must have made significant progress, with opportunities for revenue.

“Our reach is impressive. Surprisingly, we seem to have more viewers outside Nigeria than the ones within. From available data to us, we have close to two million viewers and most of them are abroad.”

He disclosed that the next target is to find a space on DSTV so that more people can have opportunity to access and enjoy our programmes: “A lot of politics are going on but we shall overcome.” He assured viewers of quality educative, enlightenment and religious programmes that would lift their spirit and strengthen their belief and trust in God.