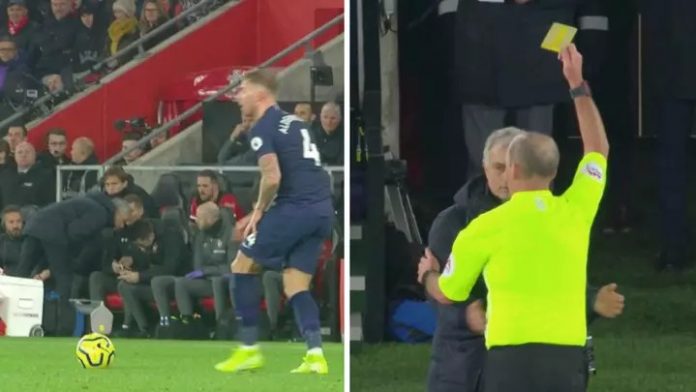 Jose Mourinho found a new hilarious way to get himself booked by going and reading Southampton’s tactics.

The Spurs boss was so impressed with the Saints’ performance against his side on New Year’s Day that he decided to take matters into his own hands.

TV cameras spotted Mourinho march over to the Southampton bench and try and take a look at some notes being scribbled down by a Saints coach.

Mourinho had a big smile on his face as he seemed to admit he had no answer to Southampton’s gameplan on New Year’s Day.

After the game, he said: “The yellow card was fair, because I was rude. But I was rude to an idiot”.

It’s unclear who the Portuguese boss was referring to as “an idiot”.

Southampton beat Tottenham 1-0 through Danny Ings’ brilliant early strike and were good value for their win.

The former Liverpool striker cut inside Toby Alderweireld with a brilliant first touch that left the Spurs defender on the floor.

Ings then wrong-footed goalkeeper Paulo Gazzaniga before running off to celebrate what proved to be the winner.

It was the 27-year-old’s 15th goal of the season in all competitions and dealt another blow to Tottenham’s top-four hopes.

Spurs missed the chance to close within three points of fourth-placed Chelsea and ended the day six adrift of the Blues in the race for Champions League football.