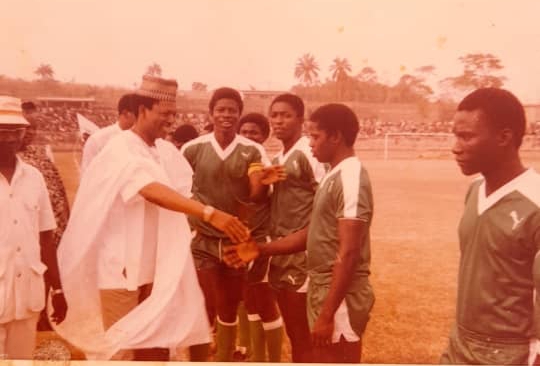 The first set of Nigeria National football team to qualify for FIFA competition, the 1983 set of Flying Eagles are pleading that the president, Muhammadu Buhari extends the same gestures he did to 1994 Super Eagles and 1985 Golden Eaglets to them.

Buhari recently fulfilled the government promises and gave houses to the players of Super Eagles who conquered Africa in the 1994 African Nations in Tunisia. He also did same to the 1985 set of Golden Eaglets.

After several failed attempts, Nigeria qualified for the first FIFA organised competition in 1983 in the FIFA U-20 World Cup tournament.

The players were promised scholarships by the then president, Shehu Shagari but he was overthrown from office through coup by President Muhammadu Buhari which made the promises left unfulfilled.

The players are pleading to the APC led government to extend the same gestures extended to Super Eagles and Golden Eaglets to them.

Speaking on behalf of the team in Abuja, Tajudeen Disu, said, “It was in 1983 when we were invited to Flying Eagles camp that was to qualify Nigeria for the elusive World Cup tournament that we’ve never been. I remember the likes of Segun Odegbami and Christian Chukwu, they could not do it. We were all dedicated to the reasons we were in camp and at the end of the day . They promised us, remember vividly it was semi final match against Guinea. A must-win game which we won on home soil and qualified Nigeria for the world cup.

“The president of Nigeria then, Alhaji Shehu Shagari who we visited in Lagos, said, “Go there and qualify Nigeria for the World Cup, we will give all of you scholarships because we heard all of you are still in Secondary School, we won’t give you guys money but scholarships to further your education.”

“The then, sports minister then and secretary general of Nigeria Football Association, Patrick Okpomo read the statements of the President to all Nigerians on National TV.

“We have done a lot to make sure that the promised are fulfilled but till date we’re still pushing for it. We graduated to the senior national team, Up till now, Nigeria never fulfil their promise, if Shagari was not overthrown then, probably he would have done it. Fortunately, it was this present goverment that took over, he too promised the ’85 set before he was removed but now he redeemed that, he has given the ’85 set their dues, now he just did one for the 94 set why not ’83 set? Because government is continuous.

Ghadafi as he’s fondly called still believes that all hopes are not lost, he added that most of them are now grandfathers while some are dead and that the scholarship could be monetised or be replaced with house gifts.

“I think he is still owing us, first time Nigeria flag was raised in any FIFA tournament. They owed us, so I’m appealing on behalf of the team that we still believe they will call us to redeem that pledge definitely nobody want scholarship anymore, we want monetary or they should give us houses just as he gave the nations cup team. I want to use this opportunity to thank the government did well for the fact that they remembered that set and what we did in 37 years ago and now some of us are no more alive but their families are there. We are still hoping, we believe they will do it.” He concluded.