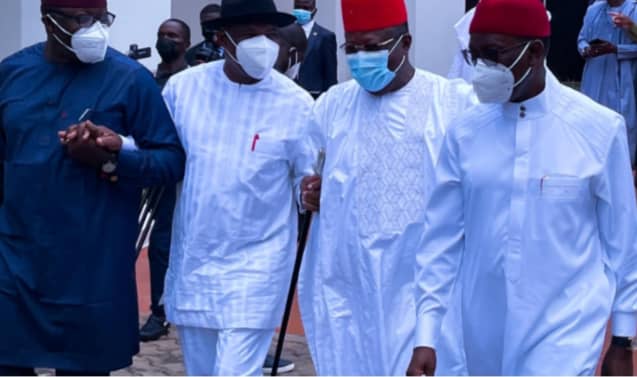 The President, Muhammadu Buhari’s order on the recovery of grazing routes for herders will top the agenda of today’s meeting of 17 southern governors.

It was gathered that the meeting, which would hold eight weeks after the governors met in Asaba, the Delta State capital, would further assess decisions taken in Asaba on the open grazing ban, restructuring, fiscal federalism and the call for state police.

The governors would be hosted by Lagos State Governor, Babajide Sanwo-Olu, at the meeting which would start by 10am today (Monday).

Recall that the governors in a communiqué issued at the end of the meeting in Asaba, banned open grazing as part of moves to address killings and kidnapping by herdsmen.

But a few days after the meeting,  the Presidency faulted the ban on open grazing. The Presidential spokesman, Garba Shehu, had, in a statement, said, “It is equally true that their (governors’) announcement is of questionable legality, given the constitutional right of all Nigerians to enjoy the same rights and freedoms within every one of our 36 states (and FCT), regardless of the state of their birth or residence.”

Also, the Attorney General of the Federation and Minister of Justice, Abubakar Malami, SAN, slammed the southern governors for banning open grazing.

According to the AGF, open grazing ban is the same thing as Northern governors banning spare parts trading in their own region, considering the fact that southerners comprise a majority of spare parts traders in the North.

The President, during a recorded television interview in June, also backed Malami’s position, adding that he had directed that grazing routes be recovered.

When asked if he agreed with the AGF’s position, Buhari had responded, “You want me to contradict my attorney-general?”

Explaining further, he said, “What I did was to ask him to go and dig the gazette of the  First Republic when people were obeying laws. There were cattle routes and grazing areas. Cattle routes were for when they (herdsmen) are moving up country, north to south or east to west, they had to go through there.

“If you allow your cattle to stray into any farm, you are arrested. The farmer is invited to submit his claims. The khadi or the judge will say pay this amount and if you can’t the cattle is sold. And if there is any benefit, you are given and people were behaving themselves and in the grazing areas, they built dams, put windmills in some places there were even veterinary departments so that the herders are limited. Their route is known, their grazing area is known.

“But I am telling you, this rushing to the centre (sic) so I asked for the gazette to make sure that those who encroached on these cattle routes and grazing areas will be dispossessed in law and try to bring some order back into the cattle grazing.”

Speaking to The PUNCH on Sunday, a top source close to one of the governors said the southern governors were disturbed about Buhari’s order on grazing routes, adding that they suspected a hidden agenda.

The source also stated,  “The governors will meet physically tomorrow (Monday) in Alausa, Lagos. All the 17 governors in Southern Nigeria will be present at the meeting. They will speak on some of the issues they raised in Asaba.”

Asked of the issues that would top agenda at the meeting, another source close to one the governors in the South-West, South-South and South-East said the governors would deliberate on the pronouncement of the President.

The source, who wished to remain anonymous because he was not authorised to speak on the matter said, “They would discuss the issue of security and open grazing ban. They are going to focus on topical political issues. The governors will be deliberating on the recent order by the President that the Attorney General of the Federation and Minister of Justice, Abubakar Malami, recover some lands for herdsmen to graze in the country. They believe it is an agenda to Fulanise the country.”

Also, one of the information managers to one of the governors in the region, said, “The meeting will address killings in spite of the ban on  open grazing. Aside from open grazing, restructuring, autonomy for judiciary will also be discussed.

“When the southern governors banned open grazing, the AGF declared the act as illegal. They didn’t react when he said that. That is how mature people behave. But tomorrow (Monday), the governors will take a position on the Federal Government’s reaction,” the source said.

Asked whether the governors would also discuss the raid by the Department of State Services on the Ibadan house of Yoruba activist Sunday Adeyemo also known as Sunday Igboho, the source stated, “Igboho is not nationalistic. The agenda of the Southern governors is broader than Igboho but you can’t rule it out that when they are talking of regional security, they would talk about him.

“They spoke about him when Igboho spoke against herders-farmers crisis but they stopped talking about him the moment some people entered into his head and he started Yoruba nation rally. It is not a right time at all.”