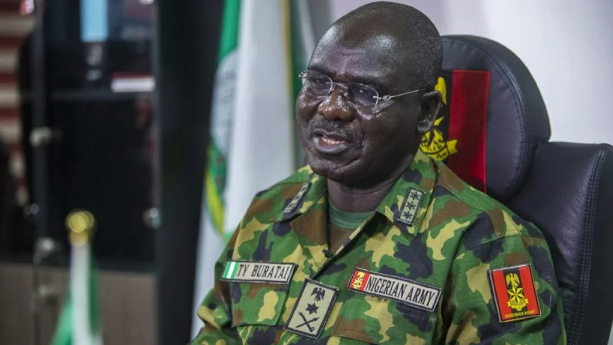 The Chief of Army Staff, Lieutenant General Tukur Buratai, has warned all officers and soldiers of the Nigerian Army to ensure the nation’s democracy is not disrupted by any person or group.

This warning was issued on Monday in Abuja when the army chief met with Principal Staff Officers, General Officers Commanding, and field commanders of the force.

“General Buratai also said that this system of governance is a democracy, and we must all ensure that Nigeria’s democracy remains stable and steady,” said army spokesman, Sagir Musa, who briefed reporters on the outcome of the meeting.

According to Musa, Buratai made it clear to the top officers that there will be no room for disloyalty among all officers and soldiers of the army.

He directed them to warn their subordinates that the Nigerian Army was determined to ensure democratic stability in the country as the only panacea for development and progress.

The army boss stated that the army would not allow any force, elements, or destabilising agents in or outside the country to set Nigeria on fire.

“We remain resolute in doing everything possible to ensure that subversive elements, detractors, and other enemies of this great nation do not have their aims and objectives of destabilisation,” the army spokesman said.

Buratai believes some criminally minded persons have hijacked the #EndSARS protest and are taking advantage of the demonstration to stir violence in the country.

He added that such persons which he described as detractors, alongside their local and international collaborators, have deliberately misrepresented troops’ efforts to ensure compliance with the curfew imposed by legitimate civil authorities in Lagos and other states as a result of the violence.

“These agitators are falsely accusing the army of being responsible for the activities of the miscreants despite glaring evidence to the contrary.

“They have continually threatened to report the army to the International Criminal Court (ICC) and also threatened various forms of sanctions against personnel and their families,” Musa told reporters at the briefing.