VIPs who have had bruises with COVID-19 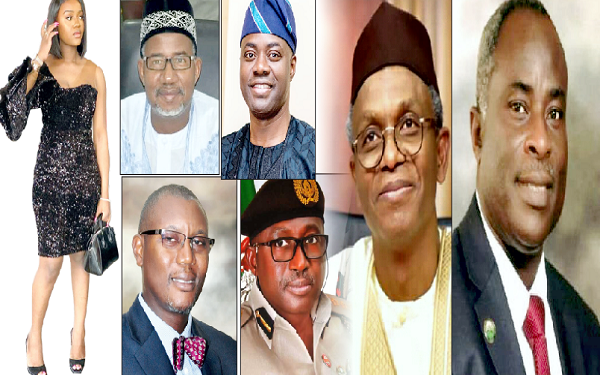 These are indeed trying times for Nigerians of all classes, ethnic groups and religious persuasions. The coronavirus pandemic has levelled the walls that set our social classes apart. From the slums of Ajegunle to the GRAs in Ikoyi and Victoria Island, COVID-19 has shown little regard for privilege or sympathy for poverty. The pandemic has led to the death of 184,643 people worldwide.

As of Thursday April 22, 2020, 873 Nigerians have been infected, 197 recovered and 28, unfortunately, died. Many of the victims are ordinary people who usually fall victim at trying moments like this. But a lot of them have also been Very Important Personalities. Some of these VIPs include senior government officials, politicians, captains of industry, senior health workers etc.

We are talking of big guns like Oyo State Governor Seyi Makinde; Bauchi State Gov Bala Mohammed; Kaduna State Gov Nasir el-Rufai; the Comptroller-General of the Nigerian Immigration Service, Muhammed Babandede; Provost of the University of Ibadan College of Medicine, Prof. Ezekiel Olapade-Olaopa; Davido’s fiancee; Chioma Rowland and more. So, this week, we will be taking a look at some high profile figures who have had to battle the virus, most of whom, however, lived to tell the story.

The latest VIP to join the growing list of celebrities who recovered from COVID-19 is the governor of Kaduna State, Nasir El-Rufai, who shared the good news on Wednesday through his Twitter handler.

“I am delighted to report today, that after nearly four weeks of observing a strict medical regime, I have now received the all-clear after two consecutive negative test results.

“I thank Almighty Allah for His grace and mercy. I also acknowledge with gratitude the massive outpouring of sympathy, prayers and public support that followed the disclosure of the infection,” he said.

The governor added that his family, who went through the trauma of potentially losing a family member and being infected, had remained supportive.

My family not only went through the trauma of potentially losing a member, but also the risk of being infected as well. The entire family has been supportive as usual, while my many friends and colleagues from all over the world have sent their prayers and best wishes.”

The Bauchi State Governor, Bala Mohammed’s COVID-19 positive test result was announced Tuesday, March 24, 2020. It was learnt that the governor had returned to Bauchi from a trip to Lagos. On his return flight, the governor met with Mohammed Abubakar, the son of ex-Vice President Atiku Abubakar’s son. Abubakar, who later tested positive who also for the coronavirus met on the plane where both men shook hands and exchanged pleasantries.

However, the governor has since tested negative to the virus. Last week, Governor Mohammed relived the whole trauma, expressing regrets and guilt for the index case in the state.

The Oyo State Governor, Seyi Makinde, tested positive for the COVID-19 virus on March 30, 2020. The governor proceeded for treatment immediately. He announced his recovery via his Twitter account on April 5, 2020. However, the governor soon came out of the trauma of self-isolation.

“This evening, I received my second negative test result for COVID-19. I especially thank Prof Temitope Alonge, who acted in my stead as Head of the Oyo State COVID-19 Task Force,” he said.

Less than a week after he was tested positive for coronavirus, Chief Medical Director of University College Hospital (UCH), Prof. Jesse Abiodun Otegbayo, tested negative on April 3, after undergoing isolation and another test.

Otegbayo had reportedly tested positive on Sunday, March 28, 2020. The Public Relations Officer of the hospital, Toye Akinrinlola, in a statement on Thursday, April 2, stated that the sample taken on Tuesday, March 31, came out negative.

“I have the pleasure to announce that the repeat test of the UCH CMD, Prof.Jesse Abiodun Otegbayo, has returned negative. He had earlier tested positive to the COVID- 19 virus last Friday.

“Otegbayo had on Sunday personally said in a statement that he tested positive for COVID- 19 and admonished all those who had contact with him to go on self-quarantine.

“However, his samples were taken again on Tuesday, March 31, 2020. Today, at about 3 p.m., the result came out negative.” Akinrinlola also disclosed that the results of the provost and deputy provost of the college of medicine, University of Ibadan, Ezekiel Olapade-Olaopa and Obafunke Denloye, were negative for COVID-19 after second tests.

Muhammed Babandede is the Comptroller-General of the Nigerian Immigration Service. According to him, he had been in self-isolating since his return from a trip to the United Kingdom on March 22.

Babandede tested positive for the deadly coronavirus days after he returned from a trip to the United Kingdom on March 22.

“The CGI, in an overwhelming appreciation, took cognisance of the prayers and supplications of everyone for him.

Most importantly, he expressed gratitude to “the Minister of Interior, Ogbeni Rauf Aregbesola; Permanent Secretary Ministry of Interior, Georgina Ekeoma Ehuriah; members of the international community who stood by the service during this trying times.“

“He prays for the recovery of others, and for God’s intervention for the world and Nigeria in this battle against Covid-19.”

In March, Davido shared that Chioma had tested positive after he and 31 members of his team got tested following trips abroad. She was the only person around her to test positive and went into self-isolation following the diagnoses.

Davido, however, shared the good news on Sunday, April 19, that his fiancee had tested negative twice, 23 days after she started battling the virus.