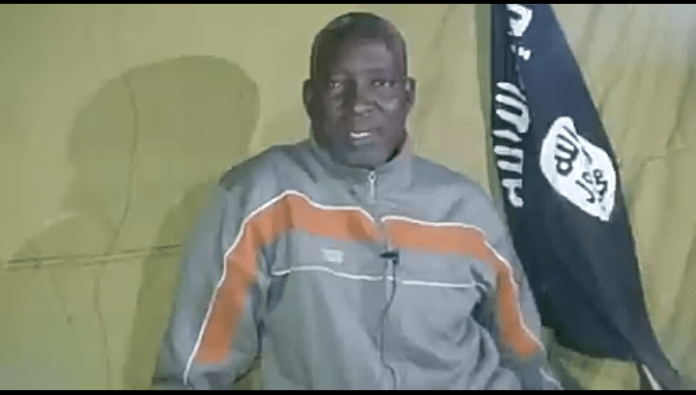 Chairman of the Christian Association of Nigeria (CAN) in Michika, Adamawa State, Rev. Lawan Andimi, who was declared missing after a raid by Boko Haram terrorists on Jan 3 has spoken from captivity.

In a short recorded video released by Abubakar Shekau faction of Boko Haram today, Andimi appealed to the leadership of CAN in Adamawa State and Governor Ahmadu Fintri to do all in their power to secure his release.

The clergyman also said in the video, which was shared on Twitter by Nigerian conflict and terrorism reporter, Ahmad Salkida, that he had left his faith in the hands of God and pleaded with his colleagues to look after his family if he did not return alive.

He declared, “If it pleases God that I should be released, I will be out, but if God decides not to get me out, then look after my children.”

CAN CHAIRMAN, ABDUCTED, CRIES OUT FROM BOKO HARAM CAMP

In a short recorded video Rev. Andimi declared that if its pleased God that he be released, he would be out, but if God decides not to get him out that they should look after his children. https://t.co/UHJKJVPVPJ pic.twitter.com/idbOlQRWYY