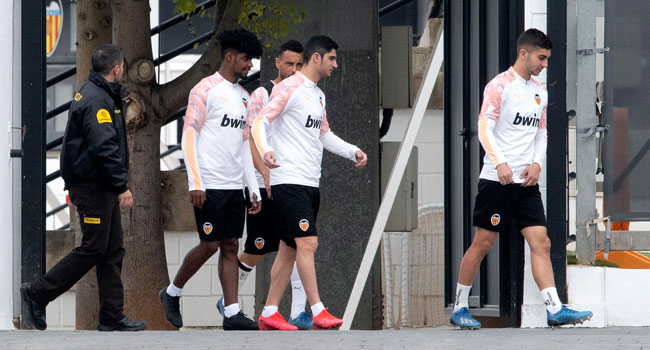 Valencia will attempt an unlikely comeback without their fans on Tuesday when they play Atalanta in the Champions League behind closed doors due to the outbreak of the coronavirus.

Retrieving a 4-1 defeat from the first leg in Italy was always going to be a formidable task for Valencia but looks even more so after UEFA instructed their home tie at Mestalla be played in an empty stadium to limit the spread in Spain.

Atalanta are based in Bergamo in the Lombardy region of northern Italy, one of the worst-hit areas in the country. Italy had registered more than 7,000 cases of coronavirus on Monday.

Spain has been less affected so far, with just under 1,000 confirmed cases on Monday and 37 in the Valencian Community, which includes Castellon, Valencia and Alicante.

Valencia announced on February 28 they would be suspending all non-sporting activity with the club’s first-team players after a journalist attending the opening fixture against Atalanta on February 19 was confirmed to have been infected.

It meant all engagement with the media before and after subsequent matches against Real Betis on February 29 and Alaves on Friday was cancelled, while a tribute to the club’s former player David Villa was also called off.

But the last-16 meeting with Atalanta will be Valencia’s first to be contested behind closed doors and, in theory, puts them at a significant disadvantage in their bid to reach the Champions League’s quarter-finals.

Valencia captain Dani Parejo expressed anger last week at what he perceives as inconsistency in the approach of the authorities to football matches.

“I am the first to be concerned about the crisis and that is why I am also first to feel indignant when I see the measures taken are not consistent,” Parejo said.

“I don’t understand how a global crisis can be managed in Spain depending on the region in which you live.”

Parejo added: “If it’s dangerous for people to attend Mestalla, it’s also dangerous at the Parc des Princes, at Anfield, at the Red Bull Arena, at the Etihad [Stadium], at Camp Nou, at the Allianz [Stadium] in Turin and at the Allianz [Arena] in Munich.”

Despite heavy restrictions on travel in and out of northern Italy, Atalanta were able to fly to Spain on Monday morning although media events usually scheduled for the day before a Champions League fixture were cancelled.

Atalanta have played only once since their thumping first-leg victory over Valencia, a 7-2 win on March 1 away at Lecce, who are based in southern Italy. Atalanta fans attending the game underwent medical checks before entering the ground.

Only five Serie A matches were staged on Sunday, with all of the games played in front of empty stands.

Italian sports minister Vincenzo Spadafora has insisted matches should be suspended completely and accused Serie A of being “irresponsible” for allowing some to go ahead.