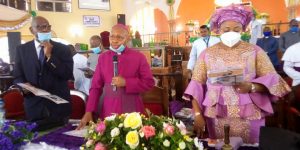 The President of 2020 Awka Anglican Diocesan Synod and the Archbishop, Ecclesiastical Province of the Niger, Most Reverend Alexander Ibezim PhD, has called on the Federal Government to support small scale industries as a way of minimizing unemployment rate in Nigeria.

The Prelate was speaking during the First Session of the Twelfth Synod of the Diocese of Awka, held at the All Saints’ Anglican Church Amaenyi Awka.

ArchBishop Ibezim, who said that it is imperative for the federal government to support small scale businesses and finance agriculture to boost the economy of the nation, regretted that Nigerian youths have lost hope in the nation which has made them engaged in various forms of social vices, urging government to save the nation from, insecurity, difficulty and hardship.

ArchBishop Ibezim PhD, who called for religious equity and end to marginalization of Christianity, Igbos and other ethnic groups, commended the administration of Governor Willie Obiano for countless efforts in the development of the state, urging him not to relent.

On the annual Synod with the theme “God of Eternal Destiny and His Major Attributes,” ArchBishop Ibezim implored Christians to imbibe the attitude of believing God and fulfilling Gods purpose in their lives.

In his speech, the Primate of all Nigeria, Most Reverend Henry Ndukuba, represented by the Bishop of Ikwo Diocese, Right Reverend Ifeneme, congratulated ArchBishop Ibezim and Awka Diocese for synod theme, noting that it is appropriate and pointed out that the destiny of this nation is in the hands of God.

While accepting the Synod Charge as a working document, the Diocesan Chancellor, Justice OJ Okeke, thanked ArchBishop Ibezim for the unique presentation of the Synod Charge stating that it would contribute bountifully to the growth of the Church and Nigerian Society.

On her part, the wife of the Archbishop, Province of the Niger, Chioma Ibezim, affirmed that the theme is targeted at redeeming souls for Jesus Christ.

This year’s synod is the first time the Diocese of Awka is holding the Synod in the city of Awka, outside the Cathedral since the advent of Christianity in 1900.

The event is held annually to assess the progress of the Diocese, review the laws governing each Diocese and to enact new ones as well as pointing out and tackling the challenges surfacing in the Diocese.

The Synod which is part of spreading the gospel of Jesus Christ and extending God’s Kingdom on earth recorded a major milestone as over fifty Bishops from various Dioceses nationwide, five hundred clergymen, monarchs, government officials and the Vice Chancellor, Nnamdi Azikiwe University Awka, Professor Charles Esimome were in attendance.