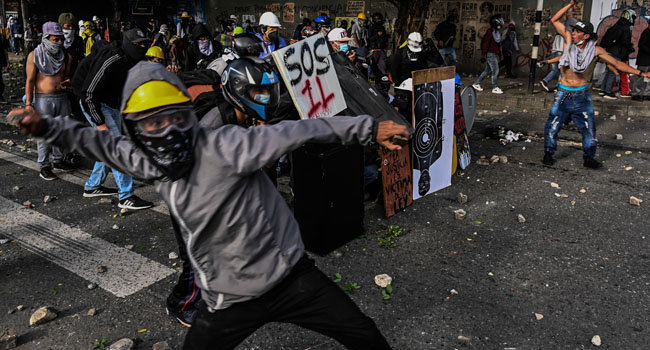 Tax reform was the issue that in April sparked mass nationwide protests that left more than 60 people dead and the government facing accusations of use of excessive force.

Protesters in several cities marked Colombia’s independence day by demanding police reform and greater support from the government in the wake of the coronavirus pandemic, which has seen the poverty rate rise from 37 to 42 percent in the country of 50 million.

“I hope that finally Congress will start to legislate in favor of the interests of all Colombians and not just a group of individuals that are getting rich,” Ivan Zapata, a 46-year-old dentist protesting in Bogota, told AFP.

Clashes between riot police and demonstrators, some armed with machetes, left dozens of civilians injured in the cities of Medellin and Cali, while 20 police officers were also injured, according to officials. The government described the protests as largely peaceful.

The demonstrations were called by the influential National Strike Committee that represents indigenous people, trade unions and students, among others.

The group had suspended its protests on June 15 but vowed to kick them off again on the nation’s independence day with the aim of taking demonstrators’ demands to Congress.

“We’re fighting for the recognition of our rights to health, education, and no violence,” said Noelia Castro, a 30-year-old teacher in the capital.

The government presented a new tax reform plan to Congress on Tuesday — one that lacked the controversial clauses that caused such uproar three months ago.

Gone are the increases in value-added tax on some goods and the broadened income tax paying base.

Instead, the new plan removes certain tax exemptions introduced by Duque himself in 2019, increases income tax for businesses and adds a three percent surcharge on the financial sector.

The plan aims to generate $3.9 billion, a long way shy of the $6.3 billion the government had hoped to raise through its previous plan that would have hit the middle classes hard.

“We listen to the voices in the streets and they must nurture the debates, but you are called by history to be the spokespeople for a country in transformation,” Duque said in the Congress ceremony, which was brought forward by several hours in a bid to avoid confrontations with protesters.

Police reform was also due on the agenda in the legislature.

The government previously announced two projects that seek to change the police promotion system and its disciplinary regulations.

Protesters have demanded greater reforms, though, including the disbanding of the anti-riot unit and the removal of the institution from the defense ministry’s sphere of responsibility.

Colombia will hold legislative elections in March and a presidential poll in May 2022.