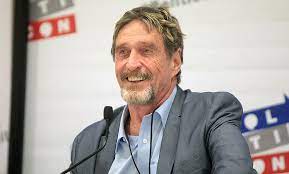 Tech entrepreneur John McAfee was found dead on Wednesday in a prison cell near Barcelona hours after a Spanish court approved his extradition to the U.S. on tax evasion charges, according to a report.

The news of McAfee’s death was first reported by Spanish newspaper El Mundo. The U.S. Department of Justice declined to comment and referred FOX Business to Spanish authorities.

McAfee, 75, said at an extradition hearing earlier this month that the charges against him were politically motivated. He ran for U.S. president as a Libertarian candidate in 2016, coming in third in the party’s primary.

McAfee was arrested at Barcelona’s airport on Oct. 7, two days after the U.S. Securities and Exchange Commission charged him with evading taxes and failing to file tax returns.

The Department of Justice alleged McAfee made over $23 million due to materially false and misleading statements about cryptocurrencies.

McAfee was charged in March by the Southern District of New York with fraud and money laundering conspiracy crimes related to two cryptocurrency schemes that netted his team $13 million.

McAfee, who founded McAfee antivirus software, was worth over $100 million before the value of his investments plunged during the 2008 financial crisis.

After selling his company, he retired to Belize and said in 2011 he uncovered a government plot to kill him. He fled to Guatemala in November 2012 after he was named a person of interest in the death of his neighbor.

McAfee was returned to the U.S. after a lengthy legal battle and lived in Tennessee until 2019 when he said he was fleeing from the U.S. government. He said taxes were illegal and that he hadn’t paid his taxes in eight years.

“In a democracy, power is given not taken,” McAfee said in his last tweet on June 18. “But it is still power. Love, compassion, caring have no use for it. But it is fuel for greed, hostility,  jealousy… All power corrupts. Take care which powers you allow a democracy to wield.”