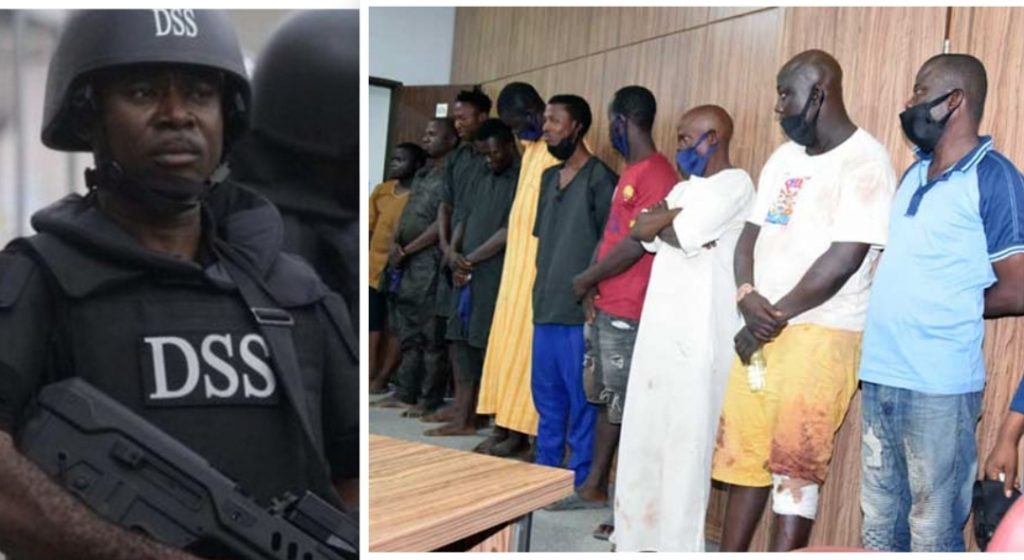 The Abuja Division of the Federal High Court on Thursday criticised the State Security Services (SSS) over failure to produce in court the 12 persons arrested at the residence of Yoruba Nation agitator, Sunday Adeyemo, popularly known as Sunday Igboho.

Justice Obiora Egwuatu, in a ruling, also ordered the SSS to produce the applicants in court at the next adjourned date.

Mr Egwuatu had, on July 23, ordered the DSS to produce the detainees in court today.

The order followed a fundamental right enforcement suit that the lawyers to the detained applicants, Pelumi Olajengbesi, filed on their behalf, pursuant to Section 32(1) and (2) of the Administration of Criminal Justice Act (ACJA) as well as Sections 6(6), 35 and 36 of 1999 Constitution, as amended.

The 12 persons, who had been in the SSS detention since July 2, are; Abdullateef Ofeyagbe, Amoda Babatunde (Aka Lady K), Tajudeen Erinoyen, Diakola Ademola, Abideen Shittu, and Jamiu Noah.

The SSS had, on July 1, confirmed that its operatives stormed Mr Igboho’s home in Ibadan, arrested about 13 suspects; including a female and 12 males.

It also disclosed that two people were killed in the raid.

However, at the resumed hearing on Thursday, Counsel to the SSS, I. Awo, informed the court that the applicants could not be brought because the service procured an order to hold the detainees.

Mr Awo based the absence of the 12 detainees on the grounds that investigations into the circumstances that led to their arrest at Mr Igboho’s home were ongoing.

He hinted that of the 12 detainees on the court’s order, only three were being held by the SSS.

The lawyer listed the three detainees in the SSS custody to include: Amoda Babatunde (aka Lady K), Diakola Ademola and Bamidele Sunday.

Reacting, Mr Olajengbesi, urged the court to reject the Service’s explanation as it was in contempt of the court’s order.

“The apparent affront on the authority of the court by the DSS cannot be justified,” the applicants’ lawyer argued.

He urged the court to discountenance the purported detention order that was procured by the SSS, arguing that it was not a Certified True Copy (CTC).

The lawyer prayed the court to admit his clients to bail.

Mr Olajengbesi also informed the court that he had been denied access to his client, and urged the court to make an order in that regard.

Ruling, Mr Egwuatu charged the SSS to purge itself of such a negative public perception as it did not paint a good picture of Nigeria before the international community.

He then ordered the security outfit to produce the detainees and show cause why they should not be granted bail.

He adjourned the matter until August 2 for continuation of hearing.