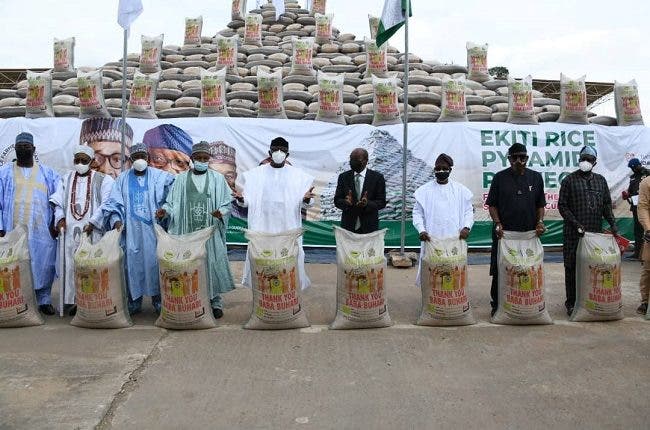 The governor of the Central Bank of Nigeria (CBN), Mr Godwin Emefiele, on Tuesday, in Ekiti State, flagged off the first pyramid in South West, with a vision to finance over three million rice farmers to boost production and improve the agriculture value chain in the country.

The CBN Governor said the Archor Borrowers programme has expanded agriculture production for 21 crops across the States of Nigeria.

Emefiele said over three million farmers were being financed in the production of varieties of products that can improve the economy, provide jobs and increase Nigeria’s imports for foreign exchange earnings.

The CBN Governor said he understood that there was the prohibition of land clearing in the South-West, saying some governors have accessed some fund to undertake such policy in their states.

He said: “This symbolic event is combined with the official flag-off of input distribution for 2021 wet season nationwide. This is another first in the annals of the ABP as we hope to take advantage of the prolonged rainy season in the South to explore the possibility of a dual cropping cycle. The ABP has continued to attract huge private sector investment in the areas of rice mills as the installed capacity of Integrated mills have grown astronomically over the last five years. Hence, we need to increase production to provide enough paddy to support milling activity.

“Agriculture is profitable today in Nigeria and we will strive to make it profitable for all. We will try to make farm mechanisation readily available to our farmers. We are not only doing rice, we are supporting Cocoa, palm tree. Provision of rural access roads is also part of our target.

Emefiele maintained all efforts must be geared towards making agriculture attractive to the teeming unemployed youths and as well support farmers with loans to help production and processing of their products.

“We must meet them halfway to ensure that we provide the enabling environment to make agriculture attractive to them. The Central Bank of Nigeria stands ready to support youths that are willing to engage in agriculture. Agriculture offers significant benefits for them and we have put in place several measures to improve access to credit for youths interested in Agriculture under the Anchor Borrowers Programme and the Agri-Business Small and Medium Enterprise Investment Scheme (AGSMEIS),” he said.

Emefiele debunked the widespread impression that some of the agriculture boosting programmes of President Buhari were concentrated in a section of the country.

The CBN Governor clarified that out of N700 billion earmarked for the ABP, that more than N300 billion has been disbursed in the Southern part of the country, for the expansion of food production.

Also endorsing the rice production programme, Governor Kayode Fayemi said President Muhammadu Buhari has demonstrated the capacity to tackle poverty and reduce dependence on foreign food by many of his initiatives in the agriculture sector.

Fayemi added that rice clearing, production of seedling and farm Implements at low interest will enhance the rice value chain from primary producers to processors.

The governor said: “Rice has become the most consumed staple in Nigeria. In the year 2018 alone, Nigeria imported 0.58 trillion worth of rice valued at $1.65 Billion. The present policy of support for local rice production by President Buhari has contributed immensely to food security in Nigeria. Considering the huge market and high population of Nigeria with the urgent need to eradicate poverty, it has successfully demonstrated the need to look inwards by taking advantage of the available fertile land, perennial river bodies and human resources for the production of rice.

“One of the policies of the Federal Government towards encouraging agriculture is the CBN Anchor Borrowers Programme. The program was introduced on November 17, 2015, to enhance rice production. The first two (2) years of the program (2015 to 2017) recorded a significant increase in rice production with a resultant decrease in Rice importation. For instance, rice importation from Thailand fell from 644,131 metric tonnes in September 2015 to 20,000 metric tonnes in September 2017, which accounts for a drop of over 90%.

“In the past, Ekiti is recognised as a rice-producing state. We want to change the narrative and restore the lost glory by moving farming from mere subsistent to a profitable business, that was why we are mobilising our farmers to benefit from the Rice Borrowers Programme.”

The Chairman, Southwest Governors Forum, Mr Rotimi Akeredolu, in his contributions, said Ekiti has always been known for rice production, saying this programme will return the lost glory and redirect the state to the right path of economic greatness.

The Governor of Kebbi and Co-Chairman, National Council on Food Security, Atiku Bagudu, said the success of the rice production was due to strong collaboration between the federal government, especially CBN and the governors.

Bagudu, who doubles as the Chairman, All Progressives Congress Governors’ Forum, Bagudu added that the programme has been police guidance of President Buhari supported by CBN to finance the agribusiness and ensure food security in rice production.

Speaking about the importance of Agriculture, the Governor of Jigawa State, Mohammed Badaru Abubakar, stated that for Nigeria to progress, that it must produce to substitute import.

The Governor of Osun State, Gboyega Oyetola, said the programme will enhance food sufficiency, diversification programme of the government and good security status.

Oyetola appealed to Nigerians to patronise local foods to serve as a morale booster to farmers to be able to produce more.