The Primate of the Episcopal Church of South Sudan has condemned the civil unrest in Jonglei state that has left at least 280 civilians and three aid workers dead this week.

He urged South Sudan’s Christians to be steadfast in their faith during these difficult days. “The time will come when God will bring this pandemic to an end and we will welcome you back to give thanks to God and continue with our normal worship and fellowship.”

The latest round of violence began on 16 May 2020 when members of the Murle tribe attacked the Lou Nuer villages in Uror county in northeastern Jonglei state. A Médecins Sans Frontières staff member was killed in the town of Pieri, along with two aid workers from a local NGO. The violence continued into Sunday, with homes torched and looted in Peiri and surrounding villages.

The UN Mission in South Sudan on 20 May 2020 released a statement from UN Special Representative David Shearer saying: “These violent assaults on civilian communities as part of an ongoing cycle of revenge must stop. While politically motivated conflict has reduced in South Sudan, intercommunal fighting has increased, causing massive suffering for families who are trying to rebuild their lives after the devastation caused by years of civil war,

The failure of South Sudan’s political parties to agree on the appointment of governors to ten states, including Jonglei, had created a power vacuum. “Appointments need to be made urgently. We strongly urge the Government and other parties to compromise and agree on these critical positions so the states can take measures to prevent conflict, build peace, and assist with the COVID-19 response,” he said.

“The fresh outbreak of intercommunal violence is being fueled by the economic deprivation caused by devastating floods which wiped away many homes and killed thousands of cattle which families rely on for their survival,” he said, adding those economic factors underlie tit-for-tat revenge attacks.” 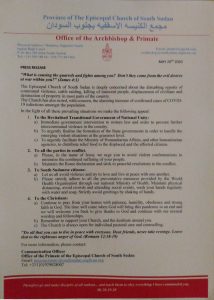