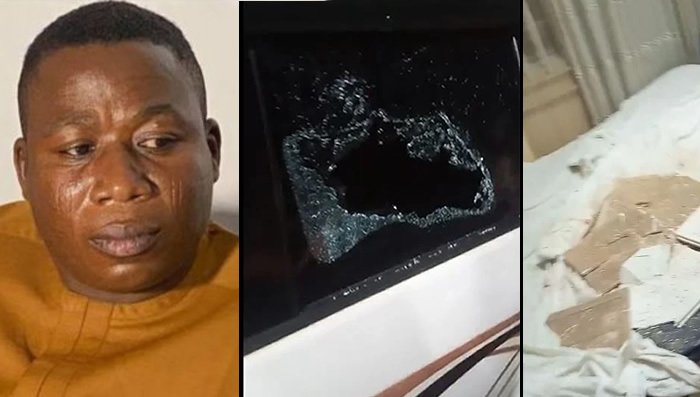 Operatives of the Department of State Services carried out a midnight attack on the residence of Yoruba rights activist, Sunday Adeyemo, better known as Sunday Igboho, in the Soka area of Ibadan, Oyo State.

A top security source, who pleaded anonymity because he wasn’t authorised to speak on the matter, on Thursday said that the secret police operated in Sunday Igboho’s residence in Ibadan early Thursday.

“The DSS operated in his (Sunday Igboho) house in Ibadan on Thursday morning,” the security source confided in our correspondent.

The source, however, could not give details on whether any of Igboho’s aides were arrested, killed or injured during the raid.

Efforts to speak with DSS spokesman, Peter Afunaya, proved abortive as of the time of filing this report.

However, our correspondent sent Afunaya a number of text messages seeking to know whether the secret police indeed raided the Ibadan residence of Igboho but the DSS spokesman neither deny nor confirm the report.

“Got into a meeting, will revert to you afterwards. Good afternoon,” Afunaya wrote in one of his text messages to our correspondent on Thursday.

Meanwhile, the activist’s spokesman, Olayomi Koiki, said his principal was not arrested during the raid. “He (Sunday Igboho) is currently safe,” the aide said.

Thursday attack was one of the attacks on Igboho in the last six months. On January 26, 2021, some faceless hoodlums reportedly attacked the Soka residence of Igboho also in Ibadan and gutted the house.

The media had also earlier reported that pandemonium broke out on February 26, 2021 along the Lagos-Ibadan Expressway when Igboho and his supporters were on their way to meet with 93-year-old Afenifere chieftain, Ayo Adebanjo.

In a viral video, a shirtless Igboho was seen with his men daring security operatives and throwing expletives at the operatives identified as men of the Department of State Services but the attempt failed and the DSS subsequently denied the attempted arrest.

Presidential spokesman, Garba Shehu, had also said the then Inspector-General of Police, Mohammed Adamu, ordered the arrest of the rights activist but many Nigerians had condemned such move, insisting that the security agencies should instead summon popular Islamic scholar, Sheikh Ahmad Gumi, who has been seen hobnobbing with bandits in the forests of Zamfara and Niger States of late.

“The situation now is very bad. Two Yoruba sons have been killed in the house of Chief Sunday Igboho. The two dead bodies have been taken away by the military. We do not know of the location where they were taken to,” the aide said in a Facebook Live.

Koiki, who said the house was attacked around 1am on Thursday, also alleged the identities of the attackers to be soldiers.

Our correspondent gathered that cars and walls of the house were riddled with bullets during the invasion.

Some of the occupants of the house were said to have been whisked away by the invaders.

One of our correspondents, who visited the house after the attack on Thursday, saw bloodstains splattered all over Igboho’s living room as well as the premises.

The Police Public Relations Officer in Oyo State, Adewale Osifeso, when contacted, said he also heard about the invasion but he would find out to know exactly what happened.

Efforts to reach the Director of Army Public Relations, Onyema Nwachukwu, proved abortive as of the time of filing this report.

The reported attack came hours to a planned rally for the secession of ‘Yoruba Nation’ in Lagos State on July 3, 2021.

Igboho on Thursday, however, cancelled the planned rally.

Igboho has been going across the South-West geopolitical zone to crusade his secessionist campaign, citing injustice meted out to the people of the region as well as worsening insecurity as reasons for his agitation but the Federal Government has insisted on the unity and indissolubility of Nigeria.

Reactions have trailed the invasion of Igboho’s residence. The Aareonakakanfo of Yorubaland, Gani Adams; as well as the leader of the umbrella body of Yoruba self-determination group, Ilana Omo Oodua, Banji Akintoye, amongst others have condemned the attack.

In a separate statement, Akintoye alleged that “the assailants were all dressed in military uniform and spoke French language fluently,” adding that nothing would stop or dissuade the agitators from seeking ‘Yoruba Nation’.

No statement has been released by the Oyo State Government or Governor Seyi Makinde but a government official, who pleaded anonymity because he wasn’t authorised to speak on the matter, told The PUNCH that the case was an individual matter.

Thursday attack is one of the many reported attacks on Igboho and his Ibadan residence since January 2021 when he issued a seven-day ultimatum to ‘killer herders’ in Igangan, in Ibarapa area of Oyo State.

Igboho had enforced same which led to the eviction of the Fulani leader in the rustic town, Seriki Saliu Abdulkadir, and his men.

Following the expiration of his ultimatum, the activist had stormed the agrarian town and saw to the eviction of Abdulkadir and his men who were accused of sundry crimes including rape, kidnapping and killing of farmers.

Abdulkadir, who has been displaced to Kwara State, however, denied the allegations.

There have been reprisals though, the latest occurred in June. About 17 persons were reportedly shot dead when hoodlums invaded Igangan on motorcycles around midnight, killing and destroying property but Abdulkadir has denied being behind the reprisal.