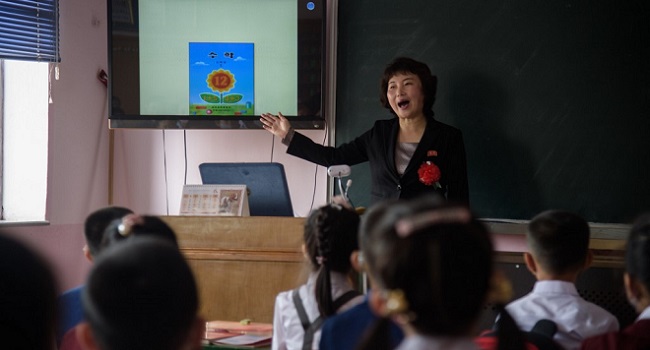 North Korean children returned to their classrooms in face masks on Wednesday as schools reopened after the new term was delayed for months by coronavirus precautions.

Pyongyang has not confirmed a single case of the deadly disease that swept the world after first emerging in neighbouring China, but has imposed strict rules, including closing its borders and putting thousands of its people into isolation.

The new school term was originally scheduled to start in early April but was repeatedly postponed. Some universities and high schools were allowed to resume classes in mid-April.

Uniformed students made their way to their schools on Wednesday morning, all wearing red commemorative flowers and face masks.

At an elementary school in Pyongyang pupils wearing backpacks had their temperatures checked as they arrived for lessons.

In the classroom, they lined up to wash their hands using water from red buckets before taking their seats.

“You have to rub your hands,” the teacher told them.

Students wore their masks in class but sat close together as they diligently listened to their teacher — also wearing a face covering — talk about the North’s leadership, maths and other topics.

Portraits of the country’s founder Kim Il Sung and his son and successor Kim Jong Il — grandfather and father of the current leader Kim Jong Un — gaze down from the wall of every classroom in the country and “Revolutionary studies” is a key part of the school curriculum.

Analysts say the North is unlikely to have avoided infections from the virus, and that its ramshackle health system could struggle to cope with a major outbreak.

The number of coronavirus infections worldwide has risen to more than 6.3 million, with around 380,000 dead across 196 countries and territories.