School Set On Fire By Angry Students In Benue 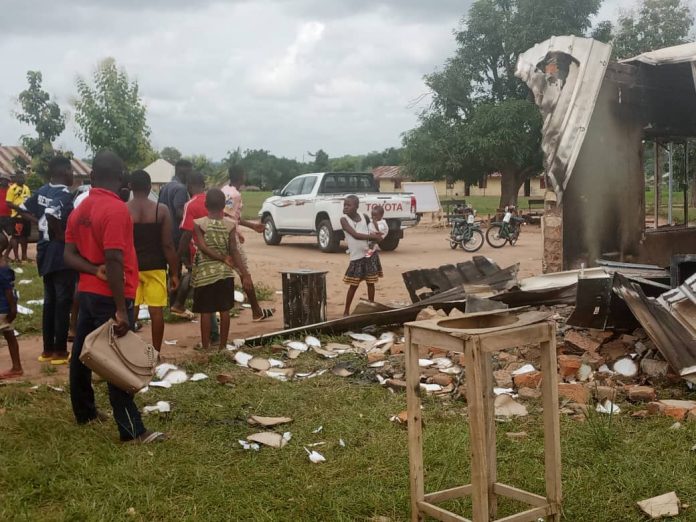 Share
Facebook Twitter LinkedIn Pinterest Email WhatsApp
Students of  Government Secondary School, Tse-Agberagba, Konshisha Local Government Area of Benue State, have on Sunday set their school on fire out of aggression.
Sources revealed that, the students were provoked by the failure of the school authorities to validate their registration for the West African Examination Council (WAEC).
The administrative block of the school and valuables, including certificates which date back to the 1990s suffered damages from the fire.
As narrated by the witnesses, the SS3 students had registered for this year’s West African Senior School Certificate Examinations (WASSCE), and their names were published successfully on WAEC website. However it became an issue when the school was informed that if the GSS Tse-Agberagba does not have enough computers to pair the number of the registered students.
Aliba Stephen Sendeh who happens to be the principal, was told by the examination body, that the center would be cancelled and a fine of N1million must be paid before it would be reopened. Mr. Sendeh was said to have appealed on behalf of the examination centre to be reopened to allow the students sit for the exam but it was a failed attempt.
It was learnt that even though the registration was edited and submitted two weeks before WASCE commenced, the GSS management was later told that it was closed.
Again, the principal reportedly made efforts to make candidates sit for exam at the centre but he was given some conditions.
The conditions indicated that GSS Tse-Agberagba must have at least 150 candidates and the school must have a perimeter fence but the school authorities were said to have found it difficult to meet the requirements, a development which prompted the Parents Teachers Association (PTA) to resolve that the school management should hold on until next year (2022) for the students to write their WASSCE.
But that did not go down well with some aggrieved students reportedly resorted to arson in the early hours of Sunday.
James Jirgba, the Council Chairman of Konshisha LGA, who visited the school for immediate assessments inspected the burnt administrative building of the school.
Mr. Amos Aar, the Media Assistant to the Konshisha chairman, reported that the chairman has called on the police to carry out a thorough investigation based on the immediate and remote causes of the incident and fish out perpetrators of the evil act.
Benue State WASSEC
Share. Facebook Twitter Pinterest LinkedIn Tumblr Email WhatsApp