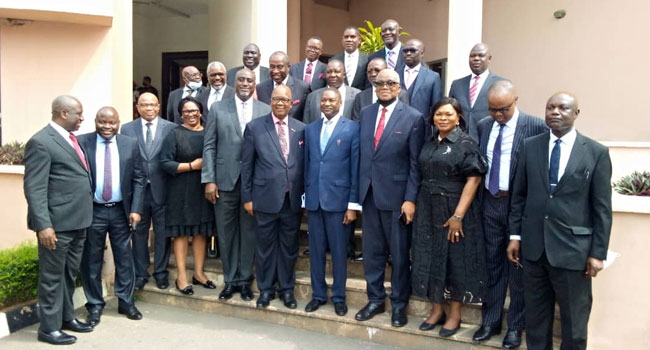 The Body of Senior Advocates of Nigeria, on Tuesday held a meeting behind closed doors, with the Attorney General of the Federation and Minister of Justice, over the siege on the home of Justice Mary Odili, last week Friday.

Speaking on behalf of the SANs at the Federal Ministry of Justice Abuja, shortly after the meeting, Adegboyega Awomolo, said they were concerned about the incident, insisting that government must unearth those behind what he termed a national embarrassment.

The AGF through his Special Assistant, Umar Gwandu, however, exonerated himself of any wrongdoing saying he was not involved in the incident.

According to him, the relevant agencies have been contacted to carry out a thorough investigation into the matter.

There had been reports that the Economic and Financial Crimes Commission (EFCC) had gone to Justice Odili’s home last Friday to execute a search warrant, as part of investigations into her husband, former Governor of Rivers State, Peter Odili.

But the Commission had also denied carrying out any such operation.

“None of our operatives was there,” EFCC Chairman, Abdulrasheed Bawa, had said.

“It is not an EFCC thing. I have called all the security and law enforcement agencies in the country and they also denied that anybody has been sent to the house to carry out any search or arrest”.