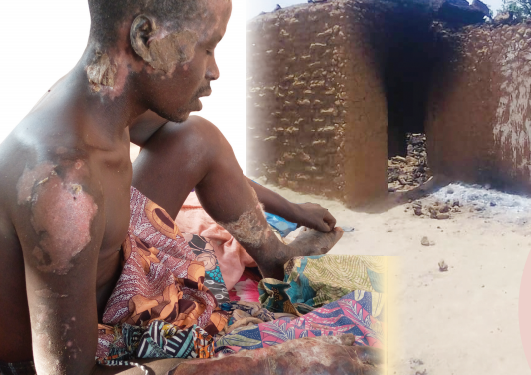 These certainly are not the best of times for the nation and the world at large. The coronavirus (COVID-19) pandemic has seized the world by the jugular, crippling businesses and killing people in hundreds of thousands.

In Nigeria, the virus has infected more than 6,000 people with death toll nearing 200. Of these, Katsina had recorded close to 300 cases at press time with about 13 deaths. But while most states of the federation have concentrated their efforts on curtailing the spread of COVID-19, Katsina is fighting the dual battles of COVID-19 and the menace of banditry.

Like the spread of coronavirus, the resurgence of banditry including cattle rustling and kidnapping in Katsina State is generating lots of apprehension and despair, especially in the frontline local government areas where bandits are running riot.

Most residents of Faskari, Sabuwa, Batsari, Jibia, Dutsi-ma, Safana, Kankara and Bakori, among other LGAs in the state, are emotionally traumatised as they wake up daily to sad tales of attacks, cattle rustling and hostage taking of their loved ones by bandits who in turn demand ransom for their release.

For instance, the recent killing of more than 55 people in one day among other multiple attacks carried out in some communities depicts the state as one in a war situation. The onslaught was believed to have been executed by more than 300 bandits with the aid of motorcycles and sophisticated weapons.

The perpetrators of the heinous act were bent on unleashing mayhem on innocent people, most of who are farmers, struggling for survival amid the economic hardship engendered by the outbreak of the COVID -19 pandemic.

A cross section of residents of the affected communities who spoke with our correspondent said they were living in great fear, totally uncertain about what the future holds for their existence, especially now that many of them are dislocated and no longer live together in their own houses.

In Bakiyawa village, for instance, Muhammad Natallia and his 19-year-old son could not hold back tears after an attack launched on the village by bandits who did not only raze their house but rustled their cattle.

Another Bakiyawa inhabitant, Alhaji Bala Aminu, had the life of his 12-year-old daughter, Nana Aminu, who had nursed the dream of becoming a medical doctor, cut short. Nana was killed by bandits in the presence of her parents.

The distraught father would not speak with our correspondent as tears rolled down his cheeks endlessly.

In an effort to restore peace to the affected areas, Governor Aminu Bello Masari had last year granted amnesty to bandits in the state after a dialogue tour of their settlements in Rugu Forest between September 4 and 9, 2019.

But the hoodlums and their forest commanders were divided with quite a number of them denouncing banditry while others boycotted the peace talks and continued in their savage acts.

While the peace accord had significantly reduced the attacks on the rural communities, the sudden resurgence of the attacks, as observed by residents, might not be unconnected with the refusal of the repentant bandits to surrender their weapons after the peace deal.

The lasting wish of most of the fleeing and traumatised villagers is decisive intervention from President Muhammadu Buhari as the son of the soil in the effort to restore normalcy.

Sixty-five-year-old Ahmed Abdul Rahaman, a resident of Sabuwa LGA, who spoke in Hausa, sees divine intervention as the ultimate solution to the problem while called calling on members of his community to seek help from God.

He said: “Our prayer is for God to take insecurity away from us. For more than one year now we have been confronted with this challenge and things are getting worse every day. We are also pleading with government to come to our aid.”

“There is no single day we don’t experience attacks from gunmen whose activities are unchecked.”

“The truth is that you can only negotiate with educated persons and not with the illiterates as we have today. These bandits live in forests without any knowledge of western or Islamic education. So there is nothing government would do to please them.”

He added: “My father was kidnapped right inside the house at about 2 am. We gave the bandits two offers which they turned down. They could not reject the third one, so they released him.

“They are giving us sleepless nights and forcing every economic activity to stand still. We are all living in great fear and tension, especially at night, and there is nothing we can do than call on government to come to our rescue. We are helpless.”

Fear of famine
Even thoughts of farming as the rainy season approaches have turned into daydreams, making the threats posed by hunger and starvation as real as daylight.

Murtala Kankara, a local farmer, predicted that there would be food shortage in the state because most farmers cannot access their farms because they are afraid of the fate that may befall them if they step out.

His words: “We are supposed to have cleared our farms now for this year’s planting season, but nothing has been done because of constant attacks by armed bandits.

“For your information, between January and May this year, the bandits killed more than 73 farmers in Dutsin-Ma, Dan-Musa and Safana local governments alone.

“Some of us who narrowly survived the attacks are now taking refuge in our relatives’ houses in Katsina, Kankara and Dutsin-Ma towns. We do not know when we will return home and start farming.”

Usman Abdulkadir, who called on government to focus more attention on banditry than COVID-19, urged both the federal and state governments to adopt proactive measures that would end bloodbath in the state.

He lamented that hundreds of people have been killed while thousands of communities have been destroyed by bandits.

He therefore called for urgent steps to be taken to stop the free reign of the criminal elements.

Governor Masari laments
In a recent meeting with the Chief of Defence Training and Operations, Defence Headquarters, Maj. Gen. Leo Irabor, during a visit to the state, Governor Aminu Masari said the resurgence of banditry and kidnapping in the state was disturbing, assuring government’s readiness to confront the issue head long and restore the people’s confidence.

He said: “In Katsina, we are faced with kidnapping and banditry attacks in these front line LGAs, and then COVID-19 set in and these hoodlums are still unleashing attacks on the people. So we are waging dual war with COVID-19 and bandits.

“We have to take measures to deal with this situation once and for all.”

The killings have also prompted the Katsina State House of Assembly to take measures that would put an end to the precarious situation facing the state. In their last deliberation on the insecurity in the state, the house tasked the executive arm to intensify effort in securing the lives and properties of the residents of local communities in the state.

Hon. Abduljalah Haruna Ranka, the member representing Safana LGA in the House of Assembly, while presenting a bill to relax the lockdown order in the front line 12 LGAs to enable the communities rally resistance to banditry attacks through vigilante efforts, called for increased military onslaught to address the attacks, decried the futile assurances by the President which hardly see the light of the day.

He said: “We heard President Muhammadu Buhari saying the bandits will face the full wrath of the law, but we are yet to see the president’s word marked with action.

“We don’t know where his directive stopped because we are yet to see the military offensive he assured the people of the state. But we are still waiting.

“Sincerely speaking, our people are really suffering from the terror of bandit attacks on a daily basis because even kidnapping business is also on the increase.”