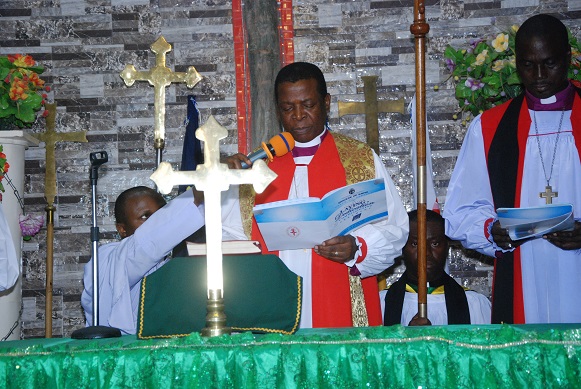 The Archbishop, Metropolitan and Primate of All Nigeria, Anglican Communion, the Most Reverend Nicholas D. Okoh has berated public officers who embezzle public funds, declaring them as real enemies of Nigeria.
Primate Okoh made this known on Wednesday in his opening address at the 12th general Synod of the Church in Port Harcourt which is ongoing.

He said, “Those who embezzle public funds are enemies of Nigeria, no matter what they say, their faith and the position they occupy”

Stressing that stealing and corruption are signs of sinful nature of man and lack of fear of God, Most Reverend Okoh lamented that stealing of public funds has become commonplace in Nigeria because of those involved

He said, “it is indisputable that many wealthy persons and political figures, especially in Africa, have been guilty of corruption, enlarging their business empire and perpetuating themselves in the office by unrighteousness and oppression.They defraud others by taking advantage of those who are unable to defend their rights or speak for themselves,”

Urging all the Synod members nationwide and in Christians in general to shun corruption in whatever gabs, Primate OKoh appealed to the Federal and State governments to be at the forefront in all efforts to curb stealing and corruption in the society while establishing systems to check public officers and their activities.

He said Government did not need new legislations to put corruption in check as there were already enough laws in Nigeria to help the Government fight the menace.
“Government should ensure that any known and proven act of stealing and corrupt practice in the public place should be punished. The culture of highly placed political, religious or traditional leaders begging for pardon for convicted corrupt persons should be discouraged,” he reiterated. 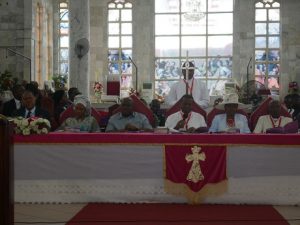 He added, “No society can make meaningful progress without seeing stealing as evil and deal with it accordingly. Corruption should be severely punished, no matter who is involved; while integrity and honesty should be openly and handsomely rewarded by the Government. This will go a long way in discouraging corruption as well as encouraging integrity, especially in the upcoming generations of Nigerians”.

“The Government should also police The Police and other security outfits so that they do not become law unto themselves and avoid abuse of power. And, to truly succeed in the fight against graft and corruption, every office, no matter how highly exalted, must be subjected to a system that scrutinizes its activities,” Archbishop Okoh maintained.

Explaining the role of the Church in the war against stealing and corruption, the Archbishop said the Church had been reaching out to more people and getting them enlisted in the heavenly army.

As he said, “The baptismal mandate of the Church is to fight against enemies of the Cross–the World, Flesh and Satan. In the fight against stealing and corruption, the Church must maintain her role as reagent or catalyst”.

“The Church must champion the campaign for national rebirth and re-orientation by going beyond preaching and ecstatic worship experiences that hardly grows faith to serious teaching on the values of the Christian Faith,”