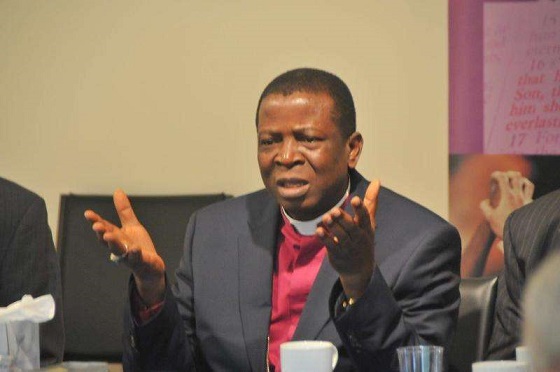 The Primate, Church of Nigeria, Anglican Communion, His Grace, Most Rev Nicholas D. Okoh has spoken on the issue of preaching and collection of tithe by pastors.

The issue of tithing has generated a lot of controversy in recent days, geared by a controversial CoolFM On Air Personality, OAP, Daddy Freeze.

Primate Okoh, who spoke with select journalists in Abuja on the subject, said payment of tithe was not by force, adding failure to pay doesn’t bring about curse.

He explained, “Tithing is a very ancient tradition, Abraham paid tithe to Melchizedek and people have become transfixed to that idea till today, but in the New Testament, giving modalities have other options.

“Then, there is the gift required to give by all; the first concept is that your life is a living sacrifice. A sacrifice is something you offer and withdraw your hand, that means the Christian offers his life totally and the totality of his training, his money and everything he has belonged to God.

“Therefore, the question of saying, ‘God take 10 per cent, I would keep 90 per cent’ does not arise. Let me give an example: If you are a tither and you give 10 per cent to the Church, and after giving this percentage, somebody is very sick, and you still have your 90 per cent, will you close your eyes to the person’s need?

“You see, that is one of the weaknesses of tithing if you follow it mechanically. Then furthermore, in John chapter 6, Jesus asked people who had food to bring it, but only one young boy who had a lunch pack–two pieces of fish and five barley loaves, offered his.

“The mother gave him to eat as he was going about with Jesus so he would not be hungry. When Jesus asked for the bread, it was not only that boy that had, many had and did not bring, but the boy brought his own, he did not give Jesus two pieces of fish and keep the rest, he did not give the barley loaves and keep the fish, he gave everything and because he gave everything, the blessing of God multiplied it over and over.

“So the intention of the mother was met, the boy had enough to eat, other people who were there, almost 20,000 had enough to eat and to spare. Now, those who had and did not bring, their own became a waste. So, the point in this matter is that, when God is asking for something, you don’t give him 10 per cent.

On the stand of some pastors that anyone who refused to pay tithe was under a divine curse, he said, “no , I don’t believe it, I don ’t curse anybody, God does not compel us to go, he only makes us willing to go. If God has given you a gift, he woos your mind, he makes you to see why. Remember that the gift you gave does not promote God.

“He is not a young officer that would be promoted a senior officer or to an executive by your gift. God is full, according to the theology of Colossians, God is full, complete.

“When you give, it is you the giver that is blessed. The person giving is the one lifted up, God is not hungry . According to Psalm 50, he said if I were hungry for meat, I won’t tell you, the whole cattle on a thousand hills belonged to me.”